Snooki may have been afraid to tell her father she was knocked up out of wedlock, but wait until he hears this: Baby LaValle is only one of many to come! 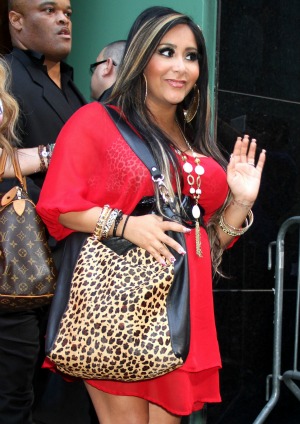 Snooki’s pregnancy isn’t even over yet, and already she’s planning to pop out more kidlets! The Jersey Shore reality star and Jionni LaValle apparently want to have a sizable brood, which may or may not be good news to her father!

Snooki, who grew up an only child, recently had to tell her father of her pregnancy. “Oh, I was scared to tell my dad, of course!” the 24-year-old admitted to People. Despite her hesitation to break the news her eggo was preggo with Jionni LaValle’s baby, the family is now anxiously awaiting the birth of their first grandchild.

What will Snooki name her little meatball? >>

“[My dad] is excited now. I think [my parents] are more excited than we are,” Snooki, real name Nicole Polizzi, added. “I’m their only child and this is going to be their [first] grandchild.”

It’s not yet clear, however, if Papa Polizzi knows just how many babies his dear daughter plans to pop out!

“I want to have like four [kids],” pregnant Snooki recently told the New York Post. “Because I was adopted — an only child — my family’s very small. And Jionni’s family is very big, and I love that so I want to build my own big family. So, four kids would be awesome.”

If that isn’t enough to knock Dad into shock, Snooki’s also been talking very openly about pregnancy sex. HollywoodLife quotes these quips as having popped out of the pint-sized preggo’s mouth during a recent interview:

Here’s hoping Snooki’s dad isn’t a gossip hound reading all of her interviews!