Woody Allen’s greatest regret in 76 years of life is having no “great movie” to claim to his name. But wait — you should totally go see To Rome With Love — even though it’s not the great one either. 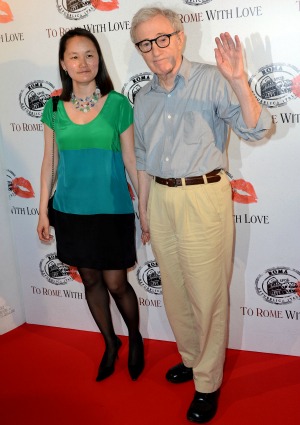 Woody Allen might want to consider holding his bucket list cards a little closer to his chest while out promoting a film. What are we supposed to think when, on one hand, he’s telling us to go see To Rome With Love, and at the same time saying he’s never made something he’s unashamed of?

Despite having a handful of Oscars to his name, 76-year-old Woody Allen fears he may be running out of time to hit one out of the park.

“I’m 76 now so I don’t think that’s going to happen, but I keep trying,” he told journalists on Monday in Paris while promoting his latest film To Rome With Love.

Is Woody Allen calling it quits? >>

“I would like to make a movie that I could… show unashamedly at a film festival” alongside the likes of Rashomon, The Seventh Seal, or 8 1/2 — movies the veteran actor and director holds in high regard.

Woody Allen, pictured here alongside wife Soon-Yi, went on to say of the 45 films he’s made, eight were “better than the others,” but “I would like to make a great movie and that drives me.”

One can only infer then, that if Woody Allen has yet to accomplish such a feat that his latest release is lacking in some way as well? We’re sure Penelope Cruz, Alec Baldwin and the other To Rome With Love actors are thrilled to hear that!

Luckily Woody Allen never plans to retire, so the possibility of the “great” one is still out there.

“It is a big myth that when you get older you become wiser and more mellow and more accepting of life,” Woody Allen added. “There is no advantage in old age. It is a bad deal and people that try and put a good spin on it by calling it your golden years are fooling you,” he said.

One bright spot in life? Spending time with young wife (you know, the one he once raised as his adopted daughter) Soon-Yi. “Sometimes the only exciting activity of the day… She takes me out like one walks the dog, really. I like it very much,” he explained.

Do you agree that Woody Allen is lacking any “great movies” in his legacy?