Conrad Murray’s lawyers claim the disgraced doctor regrets not taking the stand in his own defense. Too little, too late? 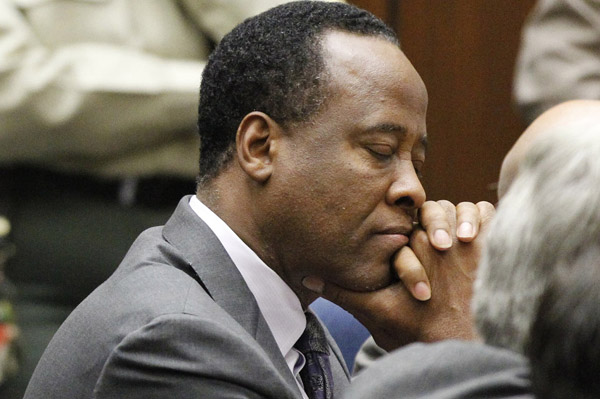 Conrad Murray spent the third anniversary of Michael Jackson’s death working on his conviction appeal, rather than mourning the loss of his former boss. The disgraced doctor — currently serving four years for causing the King of Pop’s 2009 death — has major regrets about his trial. Namely, he regrets not speaking on his own behalf.

“He says that the biggest mistake he made in the trial of the case was not testifying,” Murray’s attorney J. Michael Flanagan told Reuters. “We had so many gaps in the case that needed to be filled, that could only be supplied by Dr. Murray.”

Michael Jackson and other celebs we wish weren’t dead >>

Well, he might get another chance to tell his story if the planned appeals go through. Murray was convicted of giving Jackson the fatal dose of the powerful sedative propofol, but lawyers claim that social media tainted the jury during the six-week trial.

“I think during the trial, it would have been difficult not to go on Twitter and see anything (about the case),” his lawyers added, contending that Jackson gave himself the fatal dose while Murray slept.

As for life in lockdown, Flanagan said that Murray is “adapting fairly well for a person who is serving time and who is actually innocent.”

The Jackson family isn’t too worried about Murray’s appeals yet. Instead, they spent much of Monday at the singer’s final resting place. Daughter Paris Jackson also remembered her “daddy” on Twitter.

“RIP Michael Jackson .. Dad you will forever be in my heart

“The media always thinks that just because someone is a teenager they have to have a boyfriend.. not everyone is ‘boy crazy’ .. calm down,” she tweeted on Tuesday.