Jenny McCarthy is all about being open with her son, Evan: She doesn’t care if he sees her naked. Why? He can see a lot worse on the web, she says. 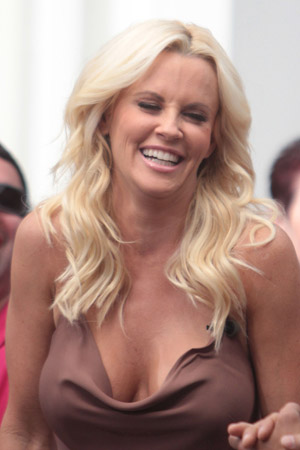 No one can accuse Jenny McCarthy of lacking self-esteem. The Love in the Wild host — and current Playboy cover girl — doesn’t think her nudity is any bid deal. In fact, she doesn’t care if her son, Evan, sees her in the buff.

“I think he can find a lot worse available on the Internet these days,” she told People of her 10-year-old. “I think people make such a big deal sometimes about it, when I feel like it just comes down to how you raise your child and how you explain things to your kid.”

That doesn’t mean she’ll just whip it out and show him, of course.

“Evan and I will have that conversation someday,” she added of her sixth skin mag cover. “I don’t have one [magazine] cover up, period. I mean, I don’t even have my Rolling Stone cover up. It’s like, who wants to look at themselves? I don’t. Seriously, the only picture I have up of myself is one of a shark eating Evan and me.”

We have to love this 39-year-old blonde bombshell: She’s hot and not afraid to keep it real, no matter if someone else likes what she has to say or not. Plus, we love that she’s showing men that “older” women are just as sexy as 19-year-olds.

“I was so tired of just seeing the 20-year-olds just considered sexy,” she said of her decision to pose again. “I was like ‘Milfs are hot too.'”

“Evan is doing amazing. He was undiagnosed from having autism, clinically which is incredible. He’s not the only one, there’s thousands of kids that get better. It was a long journey. He’s the love of my live,” McCarthy said. “I want to give Evan all my attention, because I am a single mom. I think, this uterus is closed.”

Do you like Jenny McCarthy’s view about nudity and her son?