Tyler Perry is all business in his new film, Alex Cross. The actor, best known for his light-hearted comedies, is taking a serious turn. Perry is the lead in the Rob Cohen thriller, which has him hunting down a deranged killer played by Matthew Fox. 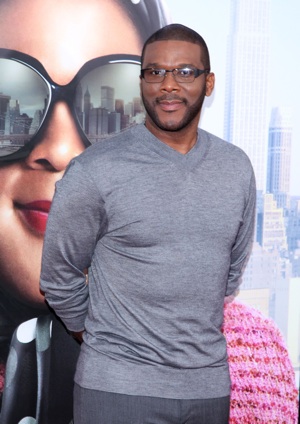 Tyler Perry is going from funny man to action star in his upcoming film, Alex Cross. The writer, director, producer and actor plays the title character in the thriller based on the popular James Patterson novel, Cross.

Cross is a detective and psychologist tracking a serial killer called Michael “The Butcher” Sullivan. Sullivan’s played by former Lost star Matthew Fox, who’s a long way from being the kind-hearted Jack Shephard.

In the film, Fox transforms into a lean, mean, psychotic machine. He makes it his business to inflict pain on others, especially Cross and his family. He has a personal vendetta against the detective, which kick-starts a dangerous cat and mouse game that pushes both men to their limits.

Tyler Perry is the highest paid man in Hollywood >>

But nothing about this story is cut and dred. Once Cross closes in on Sullivan, he uncovers an unimaginable secret that will change everything. What could it be? You’ll have to watch the film to find out.

Check out the first trailer for Alex Cross below:

Alex Cross is directed by Rob Cohen (The Fast and the Furious) and opens in theaters Oct. 19.

What do you think of the first trailer for Alex Cross?