The more things change, the more they stay the same. Baby’s a little less baby-faced, but Posh is still barely smizing. At least the Spice Girls (now ladies) put their well-documented infighting aside for a few Instagram photos — all in the name of Spice Girls — the musical? 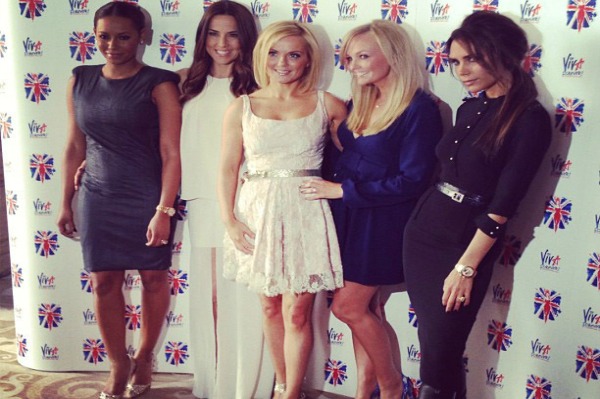 There was some buzz earlier this year that the Spice Girls would be reuniting in time for the Queen’s recent Jubilee celebrations.

That didn’t happen, but at least the gals, who were a household name in the mid- to late-1990s, did get together again.

The reason for this reunion is — drum-roll please — the Spice Girls’ new stage musical, Viva Forever!

The gals posed for photographs during a press conference Monday to announce the musical, which U.K.’s Daily Mail reports will open before Christmas at London’s Piccadilly Theatre.

The show is being brought to us by the same producer behind Mamma Mia!, Judy Craymer.

It sounds like it took some doing to get the now-Spice Ladies to go through with the press conference reunion. After all, it’s no secret the super-grrrrl group of Melanie Brown (Mel B), Melanie Chisholm (Mel C), Geri Halliwell (Ginger), Emma Bunton (Baby), and Victoria Beckham (Posh) have long been friends “on stage only.”

The Daily Mail reports the recent presser is about as far as the reunion will go. Expect to see one more kinda-sorta reunion during the musical’s opening night later this year.

“But that is absolutely it,” the pub reports. “They won’t give joint interviews to a forthcoming ITV documentary tracing their lives from the early Spice Girls days.

“And they certainly won’t sing together or reunite as a band.”

Hey, what were you expecting? Like these gals were going to perform IN the musical together. To borrow another mid-1990s-ism from Alicia Silverstone in Clueless: “As if!”