There’s been intense speculation about the identity of the anchorette to succeed Ann Curry as Matt Lauer’s sidekick on Today. Would it be the glamour girl with the attorney background, Savannah Guthrie? Or would it be Kathie Lee’s chatty co-host who won over a nation with her triumph over breast cancer, Hoda Kotb? Now it seems we know. 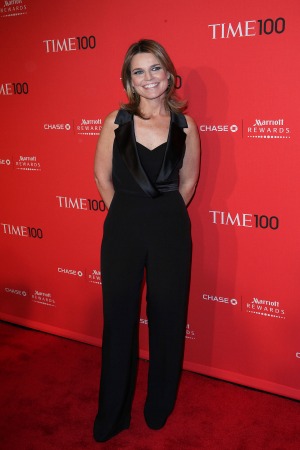 TMZ reports NBC is trying to get its new golden girl, Savannah Guthrie, “in” and push Ann “out” before the Olympics.

But it appears there’s a little paperwork that needs to be done before that happens.

Though TMZ noted Tuesday morning that 40-year-old Savannah has already signed on the dotted line as the new co-host, Ann’s $$$ fate is still up in the air.

Reportedly, Ann wants $20 million from NBC — not the $10 million the peacock network is reportedly giving her.

Curry allegedly wants the $20 mil as she’s only one year into a three-year contract where she gets $10 million annually.

But, apparently, that’s a tough, $20 million pill to swallow — and NBC isn’t budging.

To get Ann (and her lawyer) to shut it, the network wants to give her the $10 million, as originally reported, and a plum foreign correspondent’s gig.

If they were to give her the full $20 million, she’d also be given her exit papers and would not be able to work anywhere else for two years.

Those close to the network say they want to get this Curry/lawyer debacle settled. Stat. The plan is to officially announce Savannah as Matt Lauer’s right-hand woman either later this week or early next week.

The only standout contender for the gig in recent days appeared to be Hoda Kotb.

But insiders speculate Kotb, who gained prominence in hard news circles on Dateline, was harmed careerwise by the all-out, alcoholic gabfest that is the fourth hour of Today with Kathie Lee.

What do you think about NBC’s choice?