It took Twitter wrath of the cruelest kind — like what Hilary Duff faced when the new mom was photographed holding a cigarette “for a friend” — for Willow Smith to admit the tongue ring is about as real as the Fresh Prince of Bel-Air. 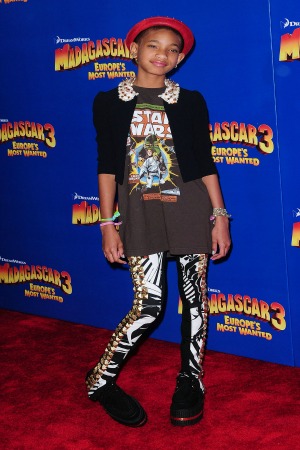 Will and Jada are certainly sooooo overjoyed that their 11-year-old daughter, Willow, posted Instagram pics featuring what appears to be metal embedded in her tongue.

That’s because it was the power-couple — not their daughter with the wacky sense of style — that had to deal with all the heat from the photos.

Most Twitter comments were some variation of: “Willow Smith is 11 and has a tongue ring. WHERE ARE HER PARENTS?”

Turns out, her parents were just letting Willow be Willow.

The tongue ring, the “Whip My Hair” singer later admitted, is a fake — nothing more than a magnet and a tween girl expressing herself through fashion, as Willow so often does.

“Sorry,” she added after admitting the fake-out heard ’round the Twitterverse.

No doubt Willow’s apology is geared mostly toward her parents, who had to face the ire of tweeters claiming the Smiths are unfit parents.

If anything, the Smiths have always encouraged their daughter to just “be.”

“She has got to have command of her body,” Will Smith said in Parade recently. “So when she goes out into the world, she’s going out with a command that is hers.

So now we need to place our outrage at bad celebrity parenting back to its rightful place: With Dina Lohan!