Over-under… How many times can John Travolta get sued in one week? The latest lawsuit, leveled by a former cruise ship worker for the déjà vu-inspiring “improper sexual conduct,” comes less than one week after Travolta & Co. was sued by a writer who chronicled Travolta’s sexy, “secret” spa life. 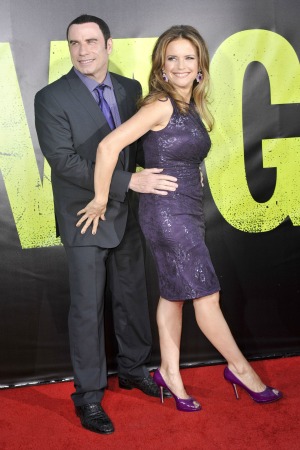 Zanzi claims that, back in June 2009, he delivered food to the Savages actor and then-Royal Caribbean guest.

Apparently, they need to start sending the ladies to Travolta’s rooms for food deliveries, because Zanzi alleges that Travolta then requested a neck massage.

Zanzi started to oblige (!) because, as we all know, food orders are always accompanied by the obligatory massage. Then, Zanzi claims, the star dropped his robe, exposed his happy man parts, and embraced the attendant with force.

Then, Zanzi says, Travolta offered him $12K to keep his mouth shut about the whole thing.

More of the same (kind of)

These juicy bits have all the makings of other accusations leveled by men against Travolta for alleged sexual impropriety. In these cases, the men were actual masseuses — not food delivery workers. But, unlike those cases, which fell apart and seemed downright bizarre — even for the world of John Travolta lawsuits — there appears to be some substance to the claims, courtesy of an “Employee Discipline Form” issued by Royal Caribbean.

It details that Zanzi had “inappropriate guest interaction,” and basically outlines the same details the former employee is alleging in the most recent lawsuit against the actor.

It should be stressed the report doesn’t explicitly say Travolta was the guest in question. TMZ reports that it independently verified that the actor was said guest.

On Tuesday morning, Travolta’s attorney and certainly one of the busiest men in Hollywood at the moment, Marty Singer, issued another statement, which read: “This is another ludicrous lawsuit with inane claims. It is obvious that Mr. Zanzi and his lawyers are looking for their 15 minutes of fame.”

Last week, Travolta & Co. was sued for trade libel by the author of The Secret Sex Life of John Travolta.

The gist of that suit is Gawker reported details of the sultry read prior to it being published. Then the star and his attorney went after the author. The author claims the pair’s threat to pursue legal action caused emotional distress, damaged his reputation, and caused people to not buy the book. Because, yeah, the one thing that prevents people from buying a book is controversy?!

So how many lawsuits do you think Team Travolta will rack up this week?