What in the world is Russell Brand’s TV show going to be about? A solid question, considering the actor/comedian explains Brand X With Russell Brand by making a “Mork” alien reference. 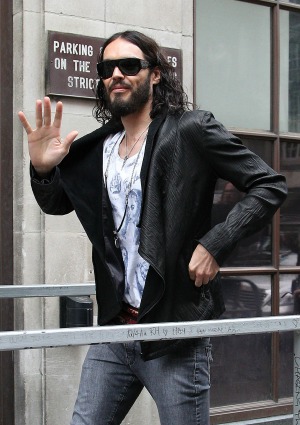 Brand X With Russell Brand promises to be a walk on the wild side when the scarcely understood show debuts on FX this Thursday. Want to know what to expect? The comedian/actor-turned-television-host encourages you to pretend he’s an alien — like from the ’70s show Mork & Mindy.

Not so hard with Russell Brand, is it?

“Remember Mork?” the 37-year-old asked a room of journalists attempting to wrap their heads around Brand X With Russell Brand. “He had to understand he was an extraterrestrial. He was trying to, I think, get a green card, and essentially that’s what I’m doing.”

So with Russell Brand’s experience assimilating to American culture — the same culture which he is now an influencer of — will he then be commentating on himself?

“We live in a time where we’re stupefied by plasticity, where we have this toxic sequined wave of vapid culture polluting our minds, denigrating our consciousness, detracting and removing us from our spirituality,” the Rock of Ages actor replied to the question. “So gossip-based stories would have less value other than in an analytical context. But if it was just more lacquered nonsense designed to distract us from the truth, then I would wisely ignore it.”

Though Brand X With Russell Brand could easily turn into a time slot of mockery aimed at Americans, take heart knowing that before the show’s debut it previously went by this title: Strangely Uplifting.

“This country has been incredibly generous and kind to me,” Russell Brand went on to say. “So it’s not like a finger-pointing exercise. Many of the aspects of American culture that come under the greatest criticism from abroad are certainly not a peninsula that a British person could arrogantly judge from, given that we did our fair share of colonialism, didn’t we?”

The in-studio audience ought to be safe as well. When asked if he’ll pick on those viewing the show in person, Katy Perry’s ex-husband replied, “I don’t see myself or my role as a malevolent jester attacking people who are already being attacked. All I want is for people to feel better than they do now… and as long as I stay in alignment with that, then I’m served by great forces.”

All of that ought to come across clear as a bell — so long as that British accent doesn’t muddle the communication up! Check out a Brand X With Russell Brand preview here!

Will you be watching Brand X With Russell Brand?