Channing Tatum thinks his former stripper colleagues are full of hot air. Find out what he has to say about their theft charges — and where the story for Magic Mike actually came from. 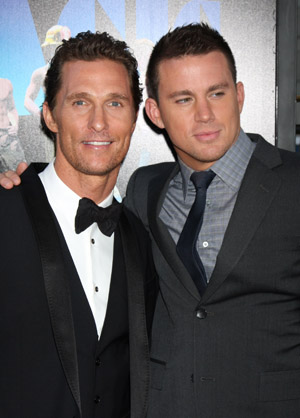 Attention Thomas “Awesome” Austin and London Steele: Channing Tatum wants you to stop riding his coattails, thanks. The Magic Mike star told reporters over the weekend that Austin and Steele — his former stripper colleagues — have been trying to make money off his name for ages.

“Look, there’s nothing that’s factual in this whole movie other than that I was an 18-year-old kid and went into this world and I dropped out of college from playing football and was living on my sister’s couch,” Tatum told reporters of the similarities between his real-life stripper experiences and those in the film. There’s not one character that I took from my real life; this is just a world that I went into, and I had a perspective on. And we created everything from a fictional place.”

The two Florida-based strippers told TMZ last week that Tatum’s moves in the film are complete ripoffs — the “hot seat” move was theirs, they alleged, adding that they “took Tatum under their wings” and “taught him everything they know.”

“He only danced for 4 months. How many events could have happened to him?” Austin said to TMZ. The pair have been mulling over a lawsuit over the film, but they’re not likely to get anywhere.

“Well, in the world we live in, anybody can file a lawsuit for anything. With regard to this, unless these guys had specific copyrights on names that they were calling themselves, or specific moves that they were doing, and they had an application filed with the US Patent Office, and Trademark Office, then yes, they could potentially [take action],” attorney Anthony Friedman of Los Angeles firm Levene, Neale, Bender, Yoo & Brill L.L.P. told Celebuzz.

So, there you have it.

“I don’t want to say anything bad about them because they’re part of the reason why I think this world is so interesting,” he added. “They’re very interesting, intriguing and bizarre characters, and I’m thankful for weird people out there. They’re some of the most creative people.”