Megan Fox and Brian Austin Green are finally going to be parents to their own child: The actress is most definitely pregnant, based on some photos snapped of the couple over the weekend. 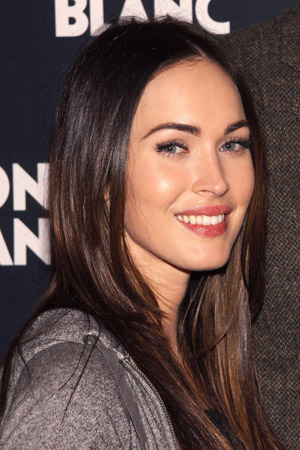 Megan Fox knows exactly what she is doing. The actress — who claims to want privacy — won’t talk about her pregnancy, but she showed off her obvious pregnant belly in a skintight outfit while out and about with her husband, Brian Austin Green. After all: The more people speculate, the more attention she gets.

“They’re thrilled about the baby!” a source told US Weekly about the couple’s bun-in-the-oven.

“The pregnancy was planned,” a pal added. “She has wanted a baby with Brian for awhile.”

That’s not a secret: The former Transformers star has talked about her desire for kids with her husband of two years for a while now. “I want at least two, probably three kids,” she told Cosmopolitan earlier this year. “I’ve always been maternal.”

The 26-year-old Botox enthusiast has had plenty of practice: She’s played stepmom to Green’s son, Kassius, since he was a toddler.

“A lot of things make me happy. But I feel unbelievably happy when my nine-year-old stepson tells me I’m beautiful. Kassius is one of the most beautiful things about my life,” Fox said earlier this year. “When I started living with Brian, his son was only two and I was 18. But ever since I’ve felt like we’ve created this family together.”

“I’ve basically been looking after Kassius since he was three and that’s part of my world that very few people really ever understood about me,” she added. “I love being a stepmom and I feel that the experience grounds me when nothing else makes sense in my life.”

Megan Fox wants to be a scientist… no, really >>

And Green, 38, is more than happy with his wife’s progress as a mother.

“I’m the daddy and I remind my son that I’m not around just to be his friend. I’m here to steer him in the right direction and teach him lessons that I’ve learned and help him become a man,” he said in 2010. “I’m totally learning as I go. But, to be honest, Megan has been just so helpful and instrumental in raising him.”

Sounds like they’ll be great parents — and she won’t have trouble whipping her body back into shape, thanks to her trainer, Harley Pasternak.