Aaron Sorkin’s new drama series The Newsroom debuted on HBO last night. “We just decided to” is a solid pilot. It will be interesting to see how the characters deal with their ideologies in a deteriorating and hyper-paced culture and navigate the current world of news in today’s rapidly-changing, 24 hour news cycle landscape.

Related story The Newsroom finale review: Will McAvoy and co. sign off 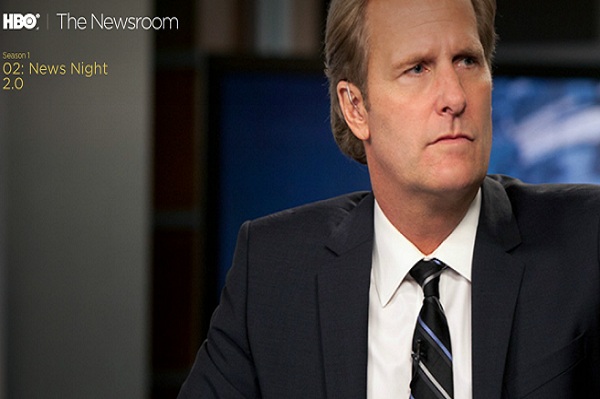 Jeff Daniels as Will McAvoy in HBO’s The Newsroom

It’s a universally acknowledged truth that no one, actually, gives a crap. No one, it seems at times, really cares that much about something as esoteric as an idea or a principle.

The notion that a character in a television show has a thought, or cares about an issue, or even has a political opinion that goes beyond partisan bickering almost seems, dare I say it, quaint in today’s hyper culture. (Hyper paced, hyper info, hyper hype.)

Enter Aaron Sorkin‘s The Newsroom, HBO’s new drama series. (HBO is on fire recently with a string of great shows.) This is a show that wants to take us to a lofty world where media strives to inform (as well as entertain) and where characters care about the quality of their content.

At this point it’s safe to say that Aaron Sorkin has reached the level of demigod. There’s his virtuoso The Social Network and Moneyball. (Not to mention Studio 60 on the Sunset Strip.) Now he brings his familiar wit and insight to our nightly newscast in this new drama series.

The Newsroom is pure Sorkin & it does not disappoint. Add to Sorkin’s pedigree the fact that the series premiere was directed by one of my all-time favorite directors, Greg Mottola (Superbad and the under-rated Daytrippers and Paul), and you’ve got one pretty darn good hour 75 minutes of television.

The pilot episode story follows cynical (to even the hardest cynics) bitter anchorman Will McAvoy (superbly played by Jeff Daniels) as an out-of-control news anchor who recently lost it on a sorority girl’s vapid question, at a college event, asking him to discuss “how great America” is. Pushed by the panel’s moderator, in a must-see, series-defining moment, McAvoy answers with some reality inducing statistics: a rapid-fire listing of our country’s abysmal ratings in everything from academics to infant mortality to literacy. The only thing we’re number one at? Number of incarcerated inmates.

It’s as if Will thinks our country needs an intervention and he’s going to deliver it: “The first step to dealing with a problem is recognizing you have one. America used to be great, we can be again.” I’m paraphrasing, but you get the idea. Will rattles off why we used to be great (which is pretty inspiring), including things like space exploration, great advances in technology and medicine, nurturing of artists and sacrifice and caring about our neighbors.

Needless to say, this truthful outburst lands him on YouTube and on “vacation.” Upon his return three weeks later, he has a new executive producer and half his staff is jumping ship. Turns out his new “EP” — the hardscrabble, brilliant and battle-weary female reporter from the front lines of war, MacKenzie McHale — feels the same way Will does. She’s an idealist (and an ex-flame, we’ll later learn). She hopes our country will not rest on the pillars of self-interest, asking, is that all we are?

McHale looks to be the only one who might be able to push the irascible McAvoy, loathed by his staff and unable to remember his assistant’s name, to accomplishing something greater than himself: a great news show, which she believes he’s capable of. She’s on board this producing train but McAvoy isn’t. He’s caught up in a power play over the fact she was hired without his approval. He renegotiates his contract to give himself weekly firing power over her. News breaks on the BP disaster, the Louisiana oil spill of 2010 and a dispute between producers before it became the story if it is the story. McAvoy thinks so. Sorkin then takes us moment-by-moment through getting that news story on the air. (Note: the BP oil spill is the largest accidental marine oil spill in history and continued to leak into the Gulf of Mexico, according to some reports, into 2011.)

Is this how newsrooms really are today? I don’t know, probably not. I highly doubt newspeople stand around on soapboxes giving speeches and platitudes, people probably just do their jobs. However, that’s no reason to criticize good TV and good art that seeks to elevate above the mundane and give us a context — a new lens, if you will — through which to view our world, our country, our media. Cue critics of the show calling it “sanctimonious,” I can hear it now. Since when does someone talking in longer than a sound-bite about a passionate opinion equal sanctimonious? In Sorkin’s world, it’s often done in a nod to irony and self-deprecation from his characters.

Its weak points? The comedy fell flat. I love good slapstick but not when it’s the ol’ “gosh this new character is a real lovable nerd”: he even enters the newsroom by tripping (and falling) over a handbag! The acting was spotty. I won’t point fingers but suffice to say the veterans — Daniels, Mortimer and Gallagher Jr. — are all superb. Some of the supporting cast haven’t quite found their groove yet and some scenes felt a tad regional theater-y.

The Newsroom has that trademark Sorkin rapid-fire dialogue from smart people, and also trademark Sorkin: caring about philosophical, political, and cultural issues. People so rarely do these days. Watching it is akin to enjoying a fine vintage wine or brandy: smooth, sophisticated but with a kicker.

The kicker? You just might never look at the news, or our country, the same way again.