While NBC still hasn’t officially said that Ann Curry is getting the boot, it’s probably the worst-kept secret in New York and media circles in general. The logical next question: Who’s “in” now that Curry’s “out” as Matt Lauer’s sidekick? 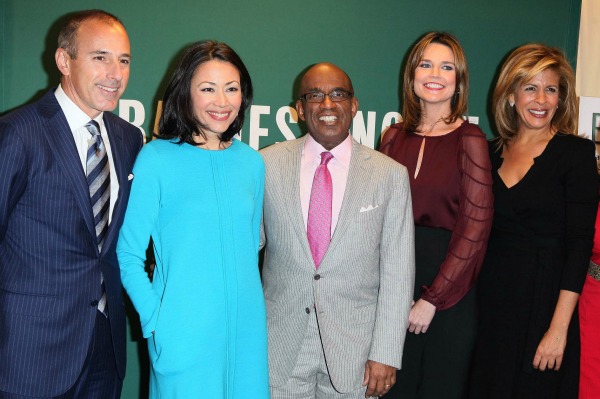 No single person is a shoo-in for the Today Show gig, as this weekend’s searches for “Hoda Kotb” — Kathie Lee’s chatty right-hand woman for the fourth hour “fluff” segments — was trending as the anchorette to beat.

Now, there’s a new contender on the block, in the form of co-host and news anchor for Today’s Hour No. 3, Savannah Guthrie.

New York Daily News reports TV officials are characterizing the move to replace Curry as co-host alongside Matt Lauer as a “tricky” game of musical chairs. That’s because there appears to be no “single obvious candidate.”

In this corner, Kotb, 47, already has a following and presence.

She came to the Today stage in 2007, following hard-news stints at markets in the South and Dateline. Her public battle with breast cancer earned the respect of many viewers.

Problem is, she’s become known more recently for her drinky-drinky antics with Kathie Lee than for her journalistic prowess.

The 40-year-old doesn’t have the following or recognition of Kotb… just yet. But what the attorney and court reporter does have, insiders say, is some serious reporting savvy and the glamour needed for such a high-profile TV gig. She’s also been with NBC since 2007.

We know there are still a lot of Ann Curry lovers out there.

In fact, you may be among the (18,327 and counting) fans who signed a petition to keep Curry on board.

Problem is, for you Curry fans, the talks NBC is reportedly holding to determine the fate of the 15-year NBC vet are a natural freak-out reaction to a big surprise: The show that invented morning news and dominated it for ages fell in a jaw-dropping ratings tie to Good Morning America this spring.

So it’s looking more and more like — petition or not — the question is now less, “Will Curry stay?” and more, “Who will replace her when she goes?”