There were great expectations going in to Aaron Sorkin’s HBO drama, The Newsroom. Unfortunately, Sunday’s premiere episode of what had been lauded as a return to “smart TV” falls almost universally (way) short of those high expectations. 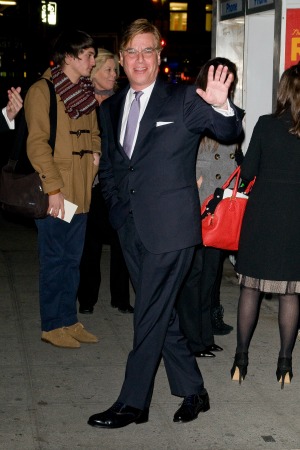 There was hope for humanity after all, as it appeared The Newsroom‘s Sunday debut was so highly anticipated largely because it was the antithesis of brainless reality TV.

Now, the scathing reviews of the HBO series created by Hollywood’s golden child Aaron Sorkin are being met with a collective “Darnit!” from TV-watchers.

The good news is these reviews aren’t attacking the show — which features big names such as Jane Fonda and Jeff Daniels — for its lack of brainy-ness.

Rather, critics ’round the globe are attacking the show for its onslaught of preachiness.

The Los Angeles Times pegged the series about life in a newsroom turned upside-down as a “no fun,” “Sorkin talk fest,” noting its strong acting and “nice moments” can’t make up for when the “writer lectures rather than entertains.”

Across the pond, The Daily Star proclaims it’s hard to believe that the anchor Daniels plays, Will McAvoy, “could say the kind of stuff he says and actually get away with it.

The review goes on to say that Sorkin squanders both his characters (with “the excessive verbosity that he has imposed on them”), and by giving the show-within-a-show, News Night, the opportunity to break every story because the series is set in 2010, giving Sorkin access to every major news event in the past two years.

“The Newsroom is not a wasted effort — even bad Aaron Sorkin is better than no Aaron Sorkin at all,” it contends. “But it is a wasted opportunity.”

This sentiment was echoed somewhat by The San Jose Mercury News, which was on a very short list of pubs to give the show an, albeit half-hearted, thumbs-up.

“I’d rather spend time with an edgy show that aims high and sometimes falls short, than one that doesn’t…. Welcome back, Mr. Sorkin. It’s a pleasure to have you”.

But most critics indicated The Newsroom fell much farther short, much more often.

The Huffington Post: “When The Newsroom isn’t obvious and self-congratulatory, it’s manipulative and shriek.”

The New Yorker: “The Newsroom gets so bad so quickly that I found my jaw dropping.”

Wait, wait… It’s the first episode. Will it get better?

From the sounds of it, many of these critics already had access to other episodes in advance. Double-darnit.

The New York Times reveals the “best” of the show doesn’t “come into full view” until we get to the third or fourth episodes.

But, at its worst, they contend, “the show chokes on its own sanctimony.”

Critics will be critics. What did you think of the first show?