Face it, work ends even for the biggest diehards. Retirement or, well, death, eventually stops the day in, day out grind. But in a candid interview to promote his latest work, To Rome with Love, the 76-year-old maker of more than 40 films talks about what it will take for him to stop directing, and how his creations (even Annie Hall) stink. 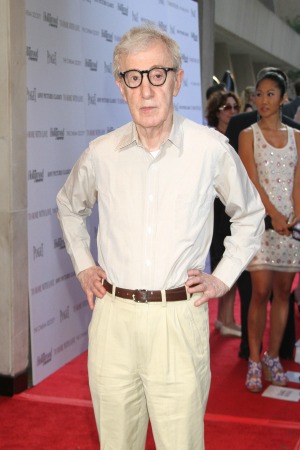 Few directors are as polarizing as Woody Allen. Much of that “love him or hate him” sentiment comes from offscreen dramas.

After all, you still can’t google “Woody Allen” without “marriage to stepdaughter” and “Soon Yi Previn” coming up. Even his  (estranged) son with Mia, Ronan Farrow, adds fuel to the fire, emerging to send “Oh, no you didn’t!” messages to his director dad — like a happy “brother-in-law” day tweet on Father’s Day.

And commentators from sizeable dailies still call for a boycott when his latest movies come out, citing, well, perceived pervy ways.

So for the haters out there, will Woody Allen be mercifully shrinking away from the limelight?

“Retirement is a very subjective thing,” the septuagenarian told Agence France-Presse on a whirlwind tour to promote his latest movie, To Rome with Love.

“Guys I know are retired and they are very happy, they travel all over the world, they go fishing, they play with their grandchildren. And they never miss work at all.

“And then, there are other people, I’m one of that kind, that love to work all the time. I can’t see myself retiring. I need to get up and work and go out.”

Allen says it will take either a stroke or a heart attack before he’ll stop making films, and he’s been making movies at a rate of one per year.

Or, in typical Woody Allen fashion, he speculates the guys with the money to back his films will wisen up and say: “‘This is not really worth all the suffering’ and just stop giving me the money.”

But, the self-deprecating director insists he’d still write for theater or for books if the movie-making gravy train stopped.

Allen equates film-making to “suffering”… over and over again

That said, it may seem strange to hear the 76-year-old talk about running out of money or heart attacks as the only way he’ll stop making movies.

“When you make a film, it’s like a chef who works on a meal,” Allen said. “After working all day in the kitchen, dicing and cutting and putting sauces on, you don’t want to eat it.”

“And that’s what I feel about a film. I work on it for a year. I’ve written it, I’ve worked with the actors, I’ve edited, I’ve put the music and I just never want to see it again.”

He goes on to say hopes are high before the flick hits the screen — so high he’s sure he has created the next Citizen Kane.

Then he sees the finished work.

“I’m just praying that it’s not an embarrassment to me, so I’ve never been satisfied or even pleased with a film that I’ve done,” Allen said. “”I make them, I finish them and that’s all.”

“I’ve never liked any of them, and I’m always thankful that the audience like some of them in spite of my disappointment,” Allen added. “It’s always to me less than the masterpiece I was certain I was destined to make.”

Well, we see he has no love for any of his films, but let’s see how much love movie-goers ultimately give to To Rome with Love, which opened nationwide this weekend.

What have you thought about Woody’s works in recent years?