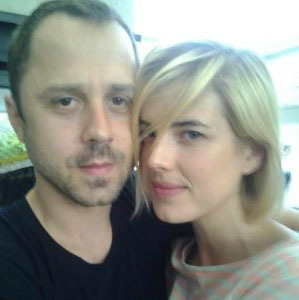 The Rum Diary‘s Giovanni Ribisi wed British supermodel Agyness Deyn last week after a whirlwind romance — and no one was more shocked than his very recent ex, singer Cat Power.

Ribisi’s publicist first broke the news, posting on Twitter this photo of the couple just moments before saying their vows in a courthouse ceremony.

The indie recording artist said she and the 37-year-old actor ended their three year relationship just two months ago, coinciding with the release of her new album, Sun — and it nearly broke her.

“I entered a long relationship which I really wanted to be successful,” she told British magazine, The Stool Pigeon. “You know that thing we’re all raised to want: a beautiful life with children — that family thing that is tangible?”

“I was trying to grow my personal life in a way I never did before. So now that relationship is over and it’s come full circle, which I don’t want to get too deep into because it hurts me very much. There’s great loss personally in my life right now, but there’s also this gift in that I’m lucky I finished this album,” the singer explained.

“It was down to the wire and (I was) really suffering, in the end. It hurts.”

“So (the break-up) wasn’t really out of left field, but it kinda was. I cut my hair off three days later, got on a plane to France and I finished the s***. It’s all good, you know. I love the person very much,” she said.

Meanwhile, Deyn’s sister used a rather unfortunate choice of words to break the couple’s big news on Twitter.