Bestselling author Kristina Riggle’s highly anticipated novel Keepsake has readers and critics buzzing. Riggle sat down with SheKnows to talk about everything from how Oprah inspired her to write about a compulsive hoarder to how she finds balance as a mother. 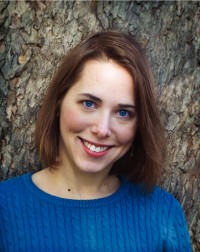 SheKnows: Your novel, Keepsake, is about a compulsive hoarder. What inspired this plot???

Kristina Riggle: It’s inevitable that I will write about things that fascinate me. Years ago, I saw an Oprah episode about a compulsive hoarder that has stuck with me all this time. Keepsake also picks up on themes from an earlier unpublished manuscript about two very different estranged sisters reluctantly joining forces. This is why I always say that no writing is wasted, even though that old book will never see the light of day in its original form.??

Also, I am intrigued by our relationship with stuff. Just today, not even an hour ago, I broke one of the wineglasses we received as a wedding gift. I am now down to having only one out of the original set of four. I don’t even like the pattern, really. I would choose a different style now. I can get other glasses. Why do I care? What does it matter? Our stuff is hardly ever just “stuff.” That’s something most all of us have in common with hoarders.??

SheKnows: The cover of Keepsake is gorgeous. What’s the story behind it? 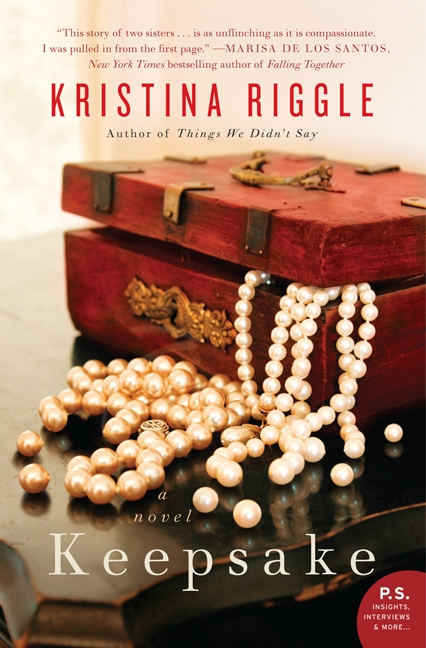 Kristina Riggle: ??Isn’t it just? I love it. This cover was tricky, and allow me to lead a standing ovation for the cover team at Morrow for hitting it out of the park. You see, this is a novel about hoarding. It is about disarray, clutter and mess. A “pretty” cover didn’t feel right. And yet, who wants a bunch of garbage on a book cover? Here’s a fun bit of trivia: this original image showed intact strings of pearls on the cover. But with the strands digitally “broken”, the cover strikes just the right note of disarray and disharmony, yet it’s still beautiful and intriguing. Even the spine of this book is beautiful. I’m so happy. Also, I love that distressed red jewelry box. Wish I had one just like it.

SheKnows: We read that you “dabble” in musical theater. Please explain!

Kristina Riggle: ??In high school I flirted with acting by trying out for a couple of plays. I got called back twice, but never cast. Then I was busy pursuing my journalism career, and a newspaper’s working hours just don’t mesh with rehearsals. After I quit my job in 2003, besides spending more time with my baby and pursuing creative writing, I thought I should reawaken my dormant acting bug. I was braver by then, so I tried out for a community theater production of How to Succeed in Business Without Really Trying directed and choreographed by friends of mine. I was a singing and dancing secretary and that few months stands out as some of the most fun I’ve ever had. I later played Miriam — a trollop of a chorus girl — in The Women by Clare Booth Luce. No singing or dancing in that play, but I did smoke a fake cigarette and get in a cat fight.?? Nowadays my dabbling takes the form of auditioning once in a while and taking the occasional class. Book signings don’t mesh with rehearsals either! I still hope to do it again. Just waiting for the right alignment of schedule and show. Of course this assumes an audition where I actually impress.

SheKnows: You’re a mother of two, and you have a dog, and you dabble in musical theater. We always ask authors about balance — what does it mean to you and how do you achieve it???

Kristina Riggle: My daily planner — still a physical, paper planner, I’m old-fashioned that way — is my baton for balance when I’m walking the tightrope. (That’s a rather tortured metaphor.) In my planner I write house chores I must not skip, medical appointments, my writing goal for the week, any publicity activities (this week including guest blogs and interview questions), exercise, even our social life (niece’s birthday party Friday). I do whatever my planner tells me, and I’d be lost without it. My husband thinks I’m nuts because if I actually do something I hadn’t written down, I will write it down just for the joy of crossing it out. For me, I need a vice-grip on my organizational skills or I’d screw it all up.??It helps that my dog is fairly low maintenance. As dogs go.

SheKnows: Describe your writing space. What are five things on your desk that would give us some insight about you???

Kristina Riggle: We have a walkout basement and my office is in one end of that space. The only window, alas, is underneath our second-level deck so I get almost no natural light in here. I never close the door because if my kids are home (like now) I am supervising them. If they are at day care or school, the house is quiet so I don’t bother with the door. The walls are a sage green. The desk is huge, old and wood, stained a kind of a reddish blonde. My parents saw it on the side of the road with a “free” sign and grabbed it, because my previous desk was a press-board thing I’d had since my childhood bedroom and was so rickety the Salvation Army would not take it. (True story. It’s still in the garage.)

Sheknows: What are you reading right now???

Kristina Riggle: An advance copy of Alif the Unseen by G. Willow Wilson, given to me by a bookseller friend. It’s fantastic (in both senses of the word — a great read and fantastical).??

SheKnows: Are you working on your next novel? If so, can you give us any hints??

Kristina Riggle: Yes, I am. And, well, I hate talking about works in progress! But it was already announced in the Publishers Weekly deal reports, so… The Whole Golden World is about a teacher-student affair and its aftermath in two families and the community.