Are you sitting down, ladies? Days of our Lives’ hottest hunk is also a talented musician and funnier than hell. Here, Patrick Muldoon talks about his fear of heights, his character’s unusual pick-up techniques, and whether he is Chris Kattan’s brother… 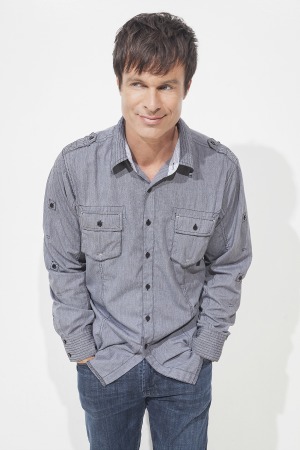 Kat: Hey Patrick! I’m so happy I get to hog you to myself for a few minutes. Ahead of time I asked if it was OK to ask you a couple goofy questions, and I was assured that you have a great sense of humor.

Patrick: Yes. I have a vile sense of humor, so ask me anything. I’ll try to restrain myself. Let’s get crazy. Let’s go for it.

Kat: Perfect. A couple serious questions first: In Days of Our Lives, you reprised your role as Austin Reed. I was catching up on your story line on the D.O.O.L. website, and that’s quite a little love triangle you got yourself into.

Patrick: Yeah, since I’ve been back the character of Austin has had a pretty rough time. My wife thought I was having an affair with Abigail. I gave Abigail a bone marrow transplant when she was a child…

Kat: That was big of you!

Patrick: I got drunk one night and made out with Abigail, and my wife found out about it. This is what happens in Salem, you know what I mean?

Kat: Oh, what a tangled web we weave when we give someone a bone marrow transplant and make out with them in a drunken stupor.

Kat: That so beats the “Does this rag smell like chloroform?” line.

Patrick: Yes, much better than that.

Kat: Do you get any say in your story lines? Like if they come at you with something, do you ever get to say, “I just don’t know how I feel about that.”

Patrick: The thing that is cool about soaps is that because you are acting every day, the writers are kind of watching you behind the scenes, and so you can kind of influence where your character goes. The writers want to write to your strengths, so if you’re funny, they’ll try to incorporate that. If you’re intense, they’ll make you emotional. But it’s pretty much what they write is what you do.

Kat: Days of Our Lives has been on the air for 47 years now, which makes you a part of television history. Where would you like to see your character, Austin, five years from now?

Patrick: I’d like to see Carrie chase Austin, instead of him chasing her. That would be cool.

Kat: It would be nice to relax for a little bit, huh?

Patrick: It’s always nice to have someone pining over you, instead of you falling all over yourself for someone else. The younger girl that I donated bone marrow to will be five years older, so maybe Austin and Abigail will be together.

Kat: That is some good stuff. We will have to stay tuned. I want to switch gears on you for a minute. You are also the lead singer of “The Sleeping Masses.” Is there a story behind the name?

Patrick: I go through phases where I won’t read anything for a year except scripts. Then I’ll have to read everything in sight for a year. So a few years ago, I went through a huge philosophy kick and read all these philosophical books. All the authors and philosophers had the same message about not going through your life asleep. About this time my band partner, Neil, and I were forming the band and I said, “I’ve got the name,” and he thought it was a cool name for a band. It kind of came from a philosophical place, but we don’t really care. It’s just a cool rock and roll name. It makes a good t-shirt. That’s all you need.

Kat: You have a very cool voice. What do you think of talent shows like American Idol and The Voice?

Patrick: It’s great TV. I’m in. They have my attention. We want to watch, whether it’s a soap opera, or American Idol, we want to see people being heroic. A lot of those contestants are coming from nowhere and then they’re on a world stage. We all relate to that.

Kat: You recently got done working on a movie about spiders, which is sure to give arachnophobes nightmares for weeks. Do you have any phobias?

Patrick: I used to have a phobia of heights. When I was in my late teens, I had kind of a phobia about heights and tight spaces.

Kat: How were you cured?

Patrick: What it kind of stems from is I was in Palm Springs with my grandparents when I was a little kid and in the hotel there was a fire and we were trapped in the elevator. When I got up to L.A., when I started going to college and started going to auditions, you’re constantly going into buildings and getting on elevators. So I just forced myself to go in the elevator and bare it, and I did it enough that it cured me of it.

Kat: You cured yourself one elevator at a time!

Patrick: That’s how it was. You got it, Kat. That was it. One elevator at a time. I broke out sweating next to people, and eventually realized there was nothing to be afraid of.

Kat: I had a really hard time finding trivia and fun facts about you and I think we should fix that. So are you ready?

Kat: Are you Chris Kattan’s much hotter brother?

Patrick: (laughs) You think I look like Chris Kattan?

Patrick: That’s so funny. Yesterday I asked about doing this comedy and one of the actors in it is Chris Kattan. That’s really weird that you asked that. No, I’m not Chris Kattan’s brother, but I might work with him next month.

Kat: But you are related to the Zappas.

Patrick: My sister (Shana Zappa) is married to Frank Zappa’s son, Ahmet. I’ve always hated all my sister’s boyfriends, but he’s really a sweetheart of a guy. He’s also a movie producer, and has a Disney movie, The Odd Life of Timothy Green, coming out in August. So everybody’s got to go see that. It’s a very heartwarming, family movie.

Kat: That’s a big can-do! How about reality TV? Do you have a favorite reality TV show?

Patrick: I’m not into that too much, but I did catch some of The Real Housewives of New Jersey last season. Not so much this season.

Kat: This is super random, but what do you order at a sushi bar?

Patrick: I’ve got a problem at sushi places, and if you ask Christie Clark, the girl who plays my wife on Days, she can’t believe it. Because we do go to this one sushi bar after work and I can eat more wasabi than anyone you’ve ever seen.

Patrick: Yeah, so I’ll order a sushi roll or whatever, but really the roll is just a way for me to eat the wasabi. It goes in my nasal cavity and the more I sweat, the more I like it.

Kat: Before I let you go, tell me about your latest movie.

Patrick: I just finished In the Dark for A&E with Elizabeth Rohm from Law and Order, Shannon Elizabeth… all the actresses have Elizabeth in their name.

Patrick: Tropical destinations and tropical drinks. Drinks with umbrellas and pineapple — I want the drink as tropical as the destination.