In 1999, after 18 nominations and 21 years, Susan Lucci finally won a Daytime Emmy Award. It was a huge moment in both soaps and pop culture. It’s been over a decade since Lucci got her just desserts and we think it’s time to pass the torch. Here are five veteran actresses who are long overdue for their first Emmy Award. 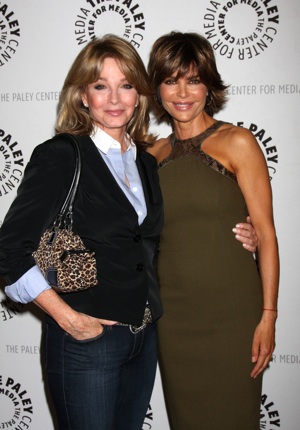 Deidre Hall — Days of Our Lives

In a genre filled with drama queens, Deidre Hall has made a niche for herself. She’s one of the few actresses who’s gained popularity by being demure. For 36 years, her character Dr. Marlena Evans has seen and done it all. She’s been kidnapped, possessed by the devil and accused of murder. Yet that hasn’t been enough to nab Hall an Emmy. The actress has been nominated three times, with the last being in 1985. That was 27 years ago. What’s the hold-up?

Lisa Rinna — Days of Our Lives

Lisa Rinna is one of the most popular actresses to ever grace daytime. She originated the role of Billie Holliday Reed on Days of Our Lives in 1992 and it made a serious impact. But despite her success, Rinna’s never earned an Emmy nod for her performance, yet she has four nominations under her belt. Oddly enough, they’re for her co-hosting gig on the now defunct Soapnet series, SoapTalk. So she’s been recognized for dishing about soaps, but not acting in one. If that’s not irony, we don’t know what is.

Melody Thomas Scott — The Young and the Restless

It’s hard to believe, but after 34 years of playing Nicole “Nikki” Newman on The Young and the Restless, Melody Thomas Scott still doesn’t have an Emmy. During her time on the show, she’s only earned two nominations, with the most recent (2002) being for a special fan award. What’s it going to take to get her an award? There’s nothing easy about playing a stripper-turned-housewife-turned-alcoholic.

No one does crazy like Robin Mattson. Whether it’s as Heather Webber on General Hospital or Janet Green on All My Children, she knows how to bring the drama. Unfortunately, her cuckoo antics have yet to impress Daytime Emmy voters. Over the course of her career, she’s scored four nominations with the first being in 1983. Mattson recently returned to GH, and we hope her latest stint brings her the statue she desperately deserves.

Katherine Kelly Lang — The Bold and the Beautiful

There’s no question that Susan Flannery’s Stephanie Forrester is the grande dame of The Bold and the Beautiful. But if she’s the queen, Katherine Kelly Lang’s Brooke Logan Forrester is the princess. The golden-haired vixen has headlined the soap for 25 years, destroying marriages and building successful businesses along the way. Surprisingly, Lang only has one Emmy nomination to her credit. Come on, guys. Flannery’s been nominated nine times and won four. Can Lang get some love?

Who do you think is overdue for an Emmy?