Justin Bieber continued to dominate New York media on Thursday. His special concluded on NBC. He held a lengthy chat with Jimmy Fallon over at YouTube. But one late-night TV host gave the Beebs a hard time. 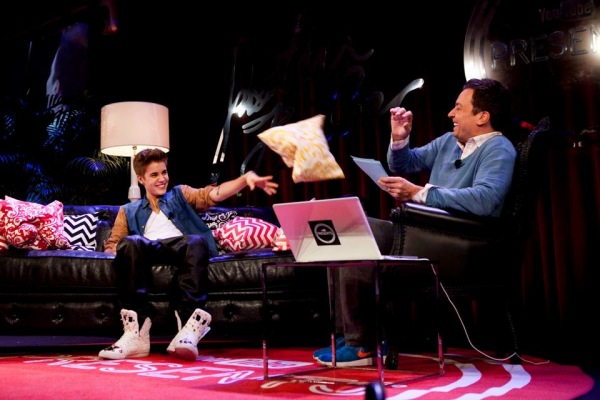 Justin Bieber has been dominating New York City as of late as he continues to promote his new album Believe, which just dropped.

There was the upbeat appearance on the The Today Show as part of their summer concert series. From there, Bieber announced plans for an impromptu gig at the famed Apollo Theater.

On Thursday night, though, the Canadian sensation took his act to the late-night circuit … with varying results.

For starters, Bieber appeared as a guest on The Late Show with David Letterman, where the host did his best “cranky old man” impersonation by chastising Bieber and treating him like the whipper-snapper he is.

In the following clip, Letterman feigns disgust at Bieber’s new tattoo, which the singer says he got to commemorate the release of the album.

“How does that help how you look?” Letterman asks.

Bieber does his best to play along, but Letterman really comes across as an out-of-touch old kook who doesn’t understand Bieber’s appeal. See for yourself.

Later, though, Bieber hooked up with another staple of late-night television when he and Jimmy Fallon appeared from YouTube’s NYC headquarters for a 45-minute long conversation that included Bieber answering several questions from his fans. For JB fans, it’s a must-watch.

These two segments, however, came on the heels of Bieber’s NBC prime-time special, which wasn’t so “special” from a ratings perspective.

While part one of the televised special pulled in meager ratings on Wednesday night, the special’s conclusion did worse. EW.com says the episode “pulled 3.1 million viewers and a 0.8 in the adult demo at 8 p.m., down a tenth from the special’s modest Wednesday-night premiere.” The network added that many of Bieber’s fans “probably watched the show online.”