Tony Parker is suing mad over the injury he received during the Chris Brown and Drake fight last week. Find out who he’s suing — it sure isn’t Brown or Drake. 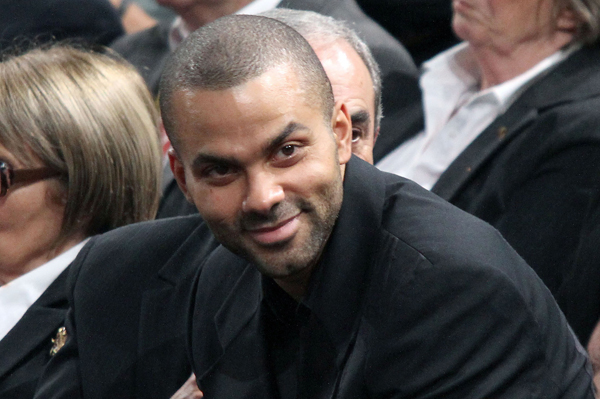 No one really talked about it, but San Antonio Spurs player Tony Parker was caught in the crossfire during the Drake and Chris Brown catfight at New York City club W.i.P. last week.

“I was there with a bunch of friends when a fight broke out. They started to throw bottles about… I got it all,” the ex-husband of Eva Longoria told Yahoo! News last week, adding that he was wearing sunglasses to obscure the injury. “The cornea has been touched. I can’t do anything for seven days… But I was lucky. The injury won’t prevent me from competing the Olympics in any way”

Parker isn’t so happy-go-lucky about it this week: He’s suing for $20 million dollars — but he’s not suing his celebrity pals (the ones who actually started the fight). Instead, he wants the SoHo club to pony up the cash for “negligence.”

According to court papers, Parker was “sitting at a separate table, apart from Drake and Brown. As a result of the altercation at the club that night, (Parker) was caused to suffer severe personal injuries.”

So, let’s get this straight: He apparently wasn’t partying with the dueling manchildren, but he doesn’t think that it’s appropriate to sue them for causing his injuries. So he’s going to sue a club that had nothing to do with starting the fight instead of the ones who did (and have the cash to pay for such a suit). Dumb? You bet.

Oh, and it gets better: Apparently the club was supposed to play babysitter between the two celebrities and were “negligent in permitting Drake’s entourage and Brown’s entourage to be in the club at the same time despite known tension between the two.” Also, he says the club lacked “sufficient and efficient security” to keep the fight from getting out of hand.

We’ll give Parker that last point — it seems like security was non-existent. But the rest? Shenanigans.

This whole thing is so ridiculous: Brown, Drake, rapper Meek Mill and now Parker are lining up to seek sympathy for the fight. Fights happen all the time at clubs, but the entitlement of these celebs is completely appalling. Here’s hoping both Brown and Drake actually get arrested and held responsible for this.

Do you think Tony Parker should be suing the club for the Chris Brown and Drake fight?