Larger-than-life The Voice mentor Cee Lo Green has said he’ll stick around as long as the hit talent show stays “exciting.” But apparently his plans to “stick around” didn’t include his beloved furball, Purrfect. 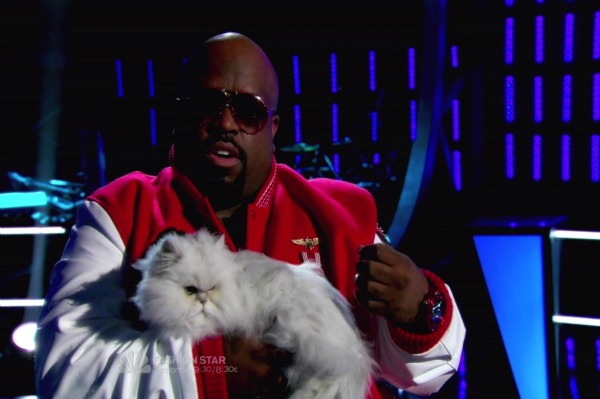 The cat’s meow for The Voice’s Cee Lo Green isn’t a cat at all. Now, it’s a pink Moluccan Cockatoo named Lady. Seems Purrfect’s out and the bird’s in for the third season of the hit talent show.

“Lady’s name says it all,” Green told People. “She’s my little lady with a big opinion.

“Sometimes whispers inappropriateness in my ear, but always ladylike.”

And it’s just like Cee Lo to say, when asked where Lady came from, that: “I met her flying around in a fantasy of mine. She was wild and free just as I’d like to be. Birds of a feather we are.”

Okay. Well, that answers it.

When he appeared on the cover of Fast Company with his now-exiled furball in tow, he wouldn’t divulge Purrfect’s sex, saying, “A gentleman don’t tell.”

He would divulge that, though it seems like it, Purrfect isn’t his cat.

Cee Lo may be a longtime cat lover, but Purrfect is a professional actor (now out of a job?).

Her “entourage” consists of two trainers.

Aside from making Fast Company, the Persian with the permanent hater face was also good enough to be a fixture on the show throughout its second season.

Purrfect was even good enough to be featured with Cee Lo on his update to that can’t-get-it-out-of-your-head Meow Mix jingle.

Love it or hate it, you can’t deny the take on the famous jingle is so very Cee Lo (and you, too, Purrfect).

The white fluffy one was even good enough to attract more than 65,000 followers on Twitter.

Now that Lady’s in for the third season, she’d better watch her back. There’s a cat that doesn’t think she’s sooooo Purrfect. Cats and birds don’t mix and, well, it is Hollywood …