Stacey Ballis impressed readers with her last novel, Good Enough to Eat, which featured a feisty heroine struggling with her relationship with food. The book had a lot of depth and wisdom, and featured mouthwatering food descriptions that were enough to send even the most seasoned reader running to the fridge. Now Stacey’s back with another food-centered novel, Off the Menu. 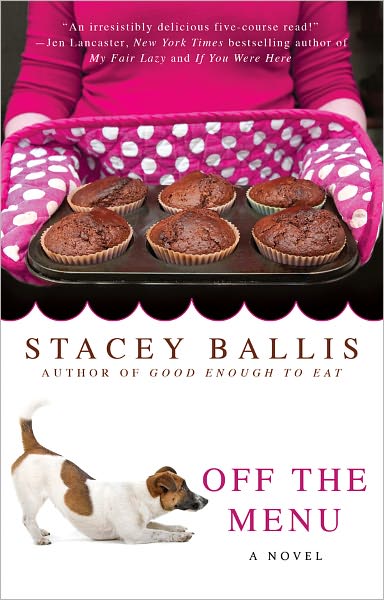 Novels with recipes have become increasingly common, and for good reason. What’s better than combining a scintillating reading experience with delicious food descriptions? And afterward, you can recreate these amazing dishes in your own kitchen, or even prepare them to enjoy while you’re reading the book! The format worked well for Stacey Ballis in her hit novel Good Enough to Eat, which featured both decadent and healthy versions of recipes featured in the book. Now she’s back with a whole new set of recipes, as well as new but lovable characters, for more food and more fun in Off the Menu.

Most people around Alana Ostermann think she’s living the high life — after all, she is the assistant to Chicago’s resident celebrity chef, Patrick Conlon, and basically is in charge of running his life behind the scenes and away from the cameras. But Alana’s life isn’t exactly as glamorous as it seems. Yes, Alana gets to help develop recipes for Patrick’s cookbooks, but she also is his glorified secretary. Her life revolves around his wants, needs and demands, and as a result, Alana doesn’t have much of a life of her own.

Alana thinks she’s fine with her arrangement with Patrick. That is, until she meets RJ, a Tennessee boy who’s recently moved to Chicago. RJ’s southern charm captures Alana and makes her realize what she’s missing, and all of a sudden, making sure that everything is perfect for Patrick doesn’t seem quite as important anymore. Alana begins to realize that, if she has no personal life and nothing to go home to (besides her beloved dog Dumpling, of course), her professional successes mean less.

As Alana begins to change her priorities and develop a new outlook on life, Patrick realizes that he may lose his invaluable assistant, and he’s not about to take that lying down. Patrick decides to fight for Alana, to take on his new rival, but Alana knows that her future isn’t up to Patrick or RJ. Alana must make some difficult decisions for herself and decide in which direction she wants her life to go.