Kristin Davis and Aaron Sorkin have made it official! The previously secretive couple debuted their love at The Newsroom premiere last night! 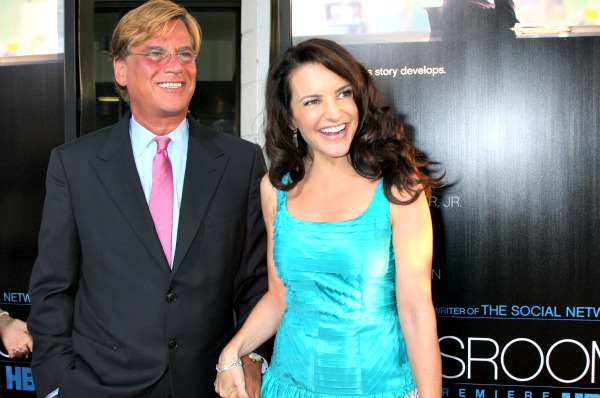 The Newsroom premiere is getting an extra dose of attention thanks to the affectionate poses of Kristin Davis and Aaron Sorkin. The pair, who confirmed they are a couple by stepping out at a public event Wednesday night, were caught holding hands, laughing and even sneaking a quick kiss!

The 47-year-old Sex and the City star was all smiles for the event, which celebrated the premiere of Aaron Sorkin’s new HBO show The Newsroom. Kristin Davis, who paired an aquamarine cocktail dress with pink heels (check out the color of his tie!), shied away from interviews in favor of chatting with friends.

In May, a source gossiped to E! News of their romance, “They are really happy. They have actually known each other a while through mutual friends and would sometimes bump into one another at industry events, but it has only just turned into something more.”

This just in: Aaron Sorkin on The Newsroom >>

Aaron Sorkin, 51, has a 12-year-old daughter named Roxy from a previous marriage. Kristin Davis, meanwhile, became a mother in 2011 with the adoption of daughter Gemma Rose.

Sources at The Newsroom commented to People, “The couple kissed for cameras on the red carpet and stayed very close at the after party. They held hands and hugged all night.”

Kristin Davis was reportedly “giggling while Aaron told stories about his prom dates as a youth.” The source added, “The couple posed for pictures with their friends and left together about half an hour into the after party.”

Do think Aaron Sorkin and Kristin Davis are a good match?