Days after Jack Osbourne revealed that he has been diagnosed with multiple sclerosis, rocker Ozzy Osbourne had to cancel a concert in Germany due to vocal problems. What’s going on with the Osbourne clan? And are Kelly and Sharon next? 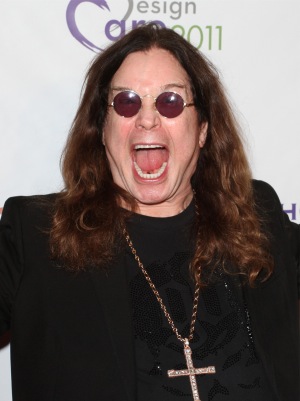 The Osbourne family has been on a roller coaster ride lately with regards to their health. Son Jack, who recently welcomed a daughter into this world, revealed that he has been diagnosed with multiple sclerosis. And now papa Ozzy has had to cancel a gig on Wednesday due to “vocal concerns.”

Sharon and Kelly should commit to bed rest immediately, just to be safe.

Ozzy Osbourne — the rocker, author and occasional reality television superstar — was preparing to take the stage as part of an Ozzy Osbourne & Friends show at the SAP Arena in Mannheim, Germany, TMZ reports. At the last minute, though, representatives from the venue had to take to the stage and alert concert attendees that Osbourne would be unable to sing that evening because of an unspecified medical condition.

The singer’s reps would not elaborate on the exact cause of the vocal issue, nor would they clarify if the gig would be rescheduled. According to Osbourne’s official Web site, he has shows in Milan, Italy and Vienna, Austria planned over the weekend. They have not been cancelled at this point.

This is not the first time that the 63-year-old singer has had to cancel shows due to his voice.

But most fans probably are thinking ahead to Aug. 3, when Ozzy and the reunited Black Sabbath are slated to perform in Chicago as part of this year’s Lollapalooza. It’s a landmark gig, one that has been decades in the making.

Is it possible that Osbourne is choosing, already, to rest his voice so it sounds best for the Sabbath crowd? We shall see… and hopefully hear.