Kate Upton isn’t one of those humble models who claims not to know how pretty she is: The Sports Illustrated cover girl isn’t afraid of admitting that guys think she’s hot. Uh, cool? 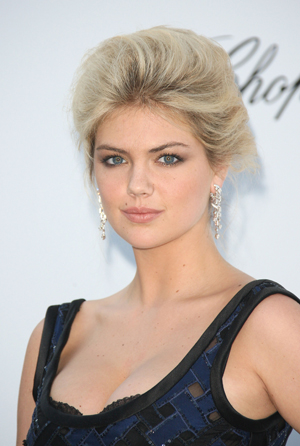 Kate Upton knows what works for her: Bouncing boobies. The model — who came to web fame in 2010 for posting a jiggly video of herself doing the “Teach Me How to Dougie” dance — is covering the new issue of GQ with a suggestive cover photo. Inside? A suggestive interview and even more suggestive photos.

The gist of the interview: Upton loves the attention she gets for showing off her tig ole bitties in minimal material.

“For the GQ photo shoot, we were on that ride where the seat spins while the actual ride is spinning, and I’m wearing a one-piece. And all of a sudden the whole entire top falls off! I’m holding myself, laughing, turning bright red, but a lot of people are watching, so they kicked us out of the Santa Monica Pier — it was so embarrassing,” she recalled during the interview. “You wouldn’t think that would happen with a one-piece!“

“I grew up in Florida riding horses, so for the majority of my life I was either in boots and jeans or a bathing suit,” Upton said. “I understand why my male followers like me.”

We know, too: Her “Cat Daddy” dance was a hit with the guys on YouTube earlier in the spring, causing the video site to pull it for violating “community standards.” It was eventually put back up and Upton even reprised the dance — albeit fully-clothed — during her appearance on Late Night With Jimmy Fallon this week.

It might seem like we’re hating on the buxom blonde, and we are — kinda. She’s used to it, but it doesn’t mean she’ll stop doing what’s made her famous. We give her kudos for capitalizing on her assets and making a career out of it.

“It’s like any job,” she told GQ. “You find your strengths and play them up.”