Mega City One has gone to the dogs. Society has been overrun by violence and corruption and there’s only one person who can stop it — Dredd. He’s the urban cop who enforces the rules and punishes criminals to the fullest extent of the law. 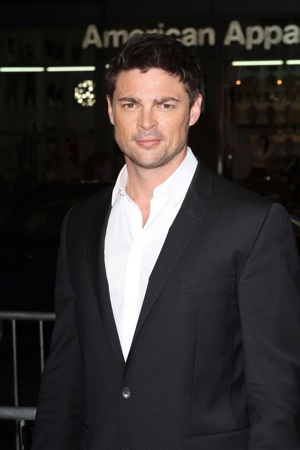 “One city is addicted to a new kind of substance. One woman controls it. But judgement is coming.”

Those are the opening lines to the first official trailer for Dredd. It’s the big-screen adaptation of the popular comic book that centers on the title character.

Most of us first encountered Judge Dredd in 1995, when Sylvester Stallone took on the role in the original feature film. It wasn’t exactly Gone With the Wind, and left much room for improvement. This time around, Star Trek‘s Karl Urban plays judge, jury and executioner to a city in ruin.

Karl Urban: From Lord of the Rings to Priest >>

Dredd is just one of many men and women who work for the Hall of Justice. They strive to bring order to their dystopian home, which has fallen prey to a substance called “Slo-Mo.”

The film’s villain of choice is a woman named Madeline ‘Ma-Ma’ Madrigal, played by Game of Thrones‘ Lena Headey. She’s a drug lord who traps Dredd and his rookie sidekick (Olivia Thirlby) in a building 200 floors high. Will they make it out alive?

Game of Thrones: “Dangerous and efficacious” >>

Judging (no pun intended) from the trailer, the pair knows how to handle themselves. And according to the final shot in the video (which may be a spoiler), Dredd ends up issuing the ultimate punishment: Death.

Check out the first official trailer for Dredd below:

Dredd is directed by Pete Travis and opens in theaters Sept. 21.

What do you think of the new Dredd?