Kelly MacDonald puts her lovely Scottish accent to use as the main character in Disney/Pixar’s new animation about a princess who does not want to get married.

“Every female can understand the mother-daughter dynamic,” actress Kelly MacDonald tells SheKnows during a press interview in Hollywood for her upcoming animated film, Brave. MacDonald, known best for her role on the HBO period drama Boardwalk Empire, plays the voice of a young princess, Merida, who lives in Scotland.

MacDonald explains the mother-daughter dynamic, the core conflict in the movie. “You adore your mother, and you look up to you mother and then at a certain point in your teens, you think you know more and you want to make your own decisions.”

Moms are a handful, sometimes

MacDonald’s character, Merida, loves the running through outdoors, riding horses, climbing mountains — all the things her mother thinks a princess should never do. When it’s time for Merida to clean up, put on a dress, and receive suitors who will be competing for her hand in marriage, this fiery redhead has a different idea in mind.

MacDonald didn’t have a very dramatic relationship with her mother.

“I didn’t have a lot of conflict, actually, with my mother,” MacDonald says. “She was very easy-going, so I didn’t have any tense situations to rebel against like Merida does.”

Kelly got lucky, didn’t she? That kind of happy-go-lucky relationship doesn’t bode well for the movies.

In Brave, there are some very surprising things that happen once Merida realizes that if she gets rid of mom, she won’t have to go through with the wedding. Now, we all know where this is leading… but we don’t want to give away any spoilers. 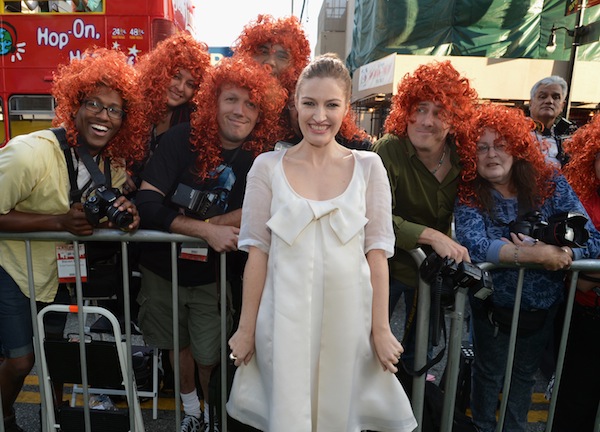 So, let’s talk about the hair! The fiery red, luscious long mane that Merida sports is one of the most advanced forms of animation to date. The hair reportedly took Pixar one year to create. MacDonald admits its one of her favorite parts of the character.