You might play opossum, er, pass out from exhaustion as well if you had to juggle a mountain of debt with your multiple addictions like Lindsay Lohan. Is it even possible for this wobbly waif to make a career comeback? You can never rule out a surprise ending in Hollywood, so here are our last-ditch ideas for reviving LiLo’s semi-conscious career. 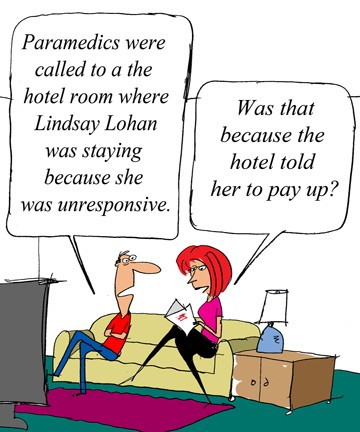 Stick her in a movie with Sandra Bullock. Not only is she America’s sweetheart, but Sandy is also bankable at the box office. She remained unflappable in the face of the whole Jesse James debacle, so we’re betting she could handle any hiccups LiLo hands her with her trademark style and grace.

Give her a make-under. They say less is more, and — girl — much less is definitely much more in your case. You were cute in Parent Trap and Mean Girls, not so much nowadays. Tone down the hair and quit with the facial fillers… you are tap-dancing into Courtney Love territory. After that, you run the risk of turning into “Cat Woman.”

Match her up with a “mean mama.” No matter how old you get, you never stop fearing a stern phone call from your mother. Even more effective, perhaps, is a mother’s special talent for unloading a heaping helping of guilt (i.e. “I’m not mad at you, just disappointed in you.”) Since we doubt momager Dina Lohan would be much help, we vote for a surrogate in the likes of Susan Sarandon or Julie Andrews — comforting, with a touch of reproach.

Leash her love for Louboutins. We sure hate to deny a girl her God-given right to shop, but poor LiLo needs an inter-friend-ion on the spending front. Her pricey pockets are basically bare, thanks to her expensive taste (the designer duds and six-figure sports cars are kind of a giveaway) and whopping legal fees over the past five years.

Card her. And by card her, we mean ask for her license and never give it back. Ever. Did you see pics of her Porsche after the dump truck disaster? It seems very likely she’ll be the next one making headlines for sending produce flying off her windshield at a farmer’s market. Nobody wants to be collateral damage when she crawls behind the wheel.

Hook her up with a celebrity sobriety sponsor. She’s been dubbed the new Robert Downey Jr., so why not have the comeback kid himself share some pointers for getting and staying clean? LiLo’s loser dad, Michael, even reached out to Robert after one of his daughter’s rehab relapses. Hey, if Lindsay is anything like RDJ, there may be hope for her yet.