SheKnows stops by Kristin Bauer’s eco-friendly Toluca Lake home to chat with the actress about everything from her tireless efforts in animal activism to her hottie co-star Alexander Skarsgard. Come meet Kristin’s family and explore her world with us in this month’s Girl Crush.

SheKnows stops by Kristin Bauer’s eco-friendly Los Angeles home to chat with the actress about everything from her tireless efforts in animal activism to her hottie co-star Alexander Skarsgard.

Come meet Kristin’s family and explore her world with us in this month’s Girl Crush.

If you’re a fan of True Blood, then you know Kristin Bauer‘s character Pam is one vampire you don’t want to mess with. Although Bauer herself can be a bit feisty, she’s more bleeding-heart than blood-sucker.

For years Bauer has campaigned for animal rights, and practiced what she preached by rescuing animals from local shelters.

Kristin’s tips on getting involved with helping animals

Along with her pets, Bauer shares her home with her husband, musician Abri van Straten, who she met in a whirlwind romance three years ago.

Although she’s a vegan and he’s a meat eater, Abri shares Kristin’s love of animals and contributes to her charity efforts.

“We want to go to Kenya [this summer] to try to do something about the elephant ivory poaching trade, which is unfortunately on a massive upsurge,” Kristin said. “I’m actually thinking about filming a documentary while I’m there.”

Now that True Blood Season 5 is wrapping, she’ll have time to do that. Kristin and the cast have spent months filming the highly anticipated season and fans are finally getting a taste of her character Pam’s back story.

“Her relationship with Eric (Alexander Skarsgard) will be revealed,” Kristin told us. “For four years we’ve been wondering, Alex and I, what our relationship was, and when we finally read it on the page, it was just brilliant.”

We can’t wait to see that play out onscreen! Skarsgard is a major heartthrob, and, we were happy to learn from Kristin, an absolute gentleman in real life.

“He’s much sexier in person,” Kristin revealed. “He’s very funny and very sweet. I just love Alex. We laugh a lot. His wit and his humor are so unique and wonderful. He’s so quick.” 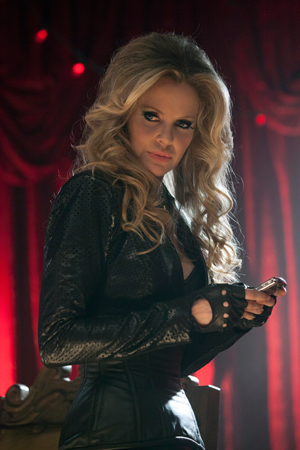 Kristin says the entire cast is a blast to work with and that with all the new babies in the True Blood family, the set has really become a full house.

“Sam Trammell had two boys last year, so Gus and Winston came by the set last week,” Kristin said. “It’s a family set and everyone brings their dogs.”

There will be two more additions when Stephen Moyer and Anna Paquin (Bill and Sookie), welcome twins in the fall.

“She’s a fabulous person and I have such respect for her,” Kristin said. “I just love her and the cast, so that is just a lucky baby.”

So does Kristin see children in her own future?

“We’ve started talking about it,” Kristin told SheKnows. “I’m such a rescuer, so that is more the area that I would go. It kills me that there are kids in foster homes and unwanted children, so [adoption] to me would be more up my alley.”

In the meantime, though, Kristin is extremely busy with an array of projects. The actress is currently giving her home a total eco-friendly makeover.

“I was raised with a real common sense attitude that you clean up after yourself,” Kristin said. “If I ruined my Barbie, I didn’t just get another one. You plan ahead and you know the resources that you have and you work within those boundaries.”

5 Tips to being eco-friendly

Kristin’s tips to being eco-friendly

With the spare time she has left, Kristin enjoys oil painting, tending to a slowly blossoming garden, and taking cooking classes with Abri.

“He’s been really lovely about trying to learn what a vegetable is,” laughed Kristin. “It’s really sweet, he thought couscous was a vegetable when we met!”

Watch our full interview with the True Blood star

Up next: Girl crush quickie Q&A with Kristin Bauer >>

Update: Story changed to reflect news that Anna Paquin is having twins.