David Beckham’s torch is up for grabs to any hands that just happen to be filled with cash! The soccer star’s Olympic torch is up for auction — check out how much the bidding is up to already. 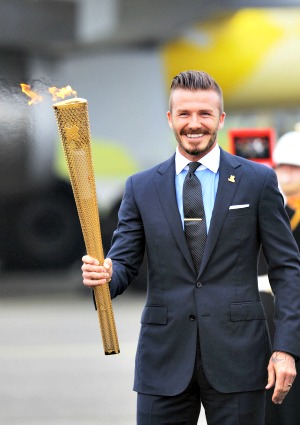 David Beckham‘s torch is up on the auction block, enticing bidders to take home a flaming hot piece of history!

Promising bidders that David Beckham’s torch is a solid investment, the Official London 2012 Auction site reads, “Own a unique piece of history with this very special Olympic torch.”

As pictured in the photo seen here, “This is the torch carried by David Beckham on 18 May 2012 as the Olympic Flame arrived in the United Kingdom, and used to light the first Olympic cauldron of the London 2012 Torch Relay.”

Athletes bare it all, almost, in the name of underwear advertising >>

“One of the most coveted items of London 2012 is made even more special through the addition of an original David Beckham autographed shard… and it could be yours.

It’s a piece of history from the unforgettable journey of the Olympic Flame through more than 1,000 cities, towns and villages in the UK over the course of 70 days, shining a light on the very best of Britain.

This rare and historic Olympic artifact could be yours to own!”

As of Wednesday afternoon, bidding on David Beckham’s torch stands at £3,050, or $3,866.62 for those of us still paying for pieces of history with the U.S. dollar.

Ryan Seacrest and NBC team up for 2012 Olympic ratings gold >>

Coincidentally, the auction closes on the Fourth of July, while the 2012 Olympics won’t commence until July 27. Perhaps the auction end date is a sign that David Beckham’s torch ought to be liberated to the United States? Happy bidding!

How much would you pay to take home David Beckham’s torch?