Carrie Underwood caught heat after she was quoted in a British newspaper for defending gay marriage. Now, while on a U.K. press tour, Underwood defends her comments… while shifting the focus back to her music. 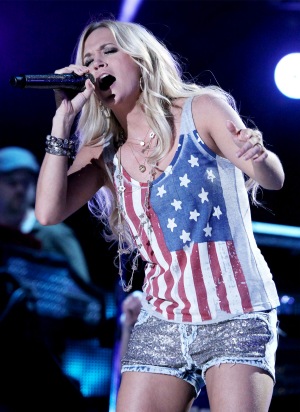 Oh, Carrie Underwood. Didn’t the Dixie Chicks teach you anything?

Country music fans aren’t always open-minded and supportive of artists who voice their opinions… particularly about hot-button political issues. So when the American Idol winner and music-chart superstar came out in support of gay marriage — going so far as to claim that her church was gay-friendly — she received more than a little heat from the country-music faithful.

Today, Underwood took the opportunity to clarify her earlier statements.

Speaking with the Associated Press, Underwood said she was “asked a difficult question in the last five minutes of an interview,” and that she “answered it the best way I knew how.” Eager to distance herself from the controversy, Underwood went so far as to say, “I love making music and I generally try to stay out of any kind of controversy.”

As we noted earlier, the backlash Underwood immediately faced in the wake of her comments resembled the tidal wave of anger and hatred the Dixie Chicks experienced when they spoke out of turn against President George W. Bush and the Iraq War back in 2003.

Has anyone heard from them since?

In the same AP article, Underwood elaborates on how she’s learning to be a role model with each passing day.

“No matter what happens in your life, something you do, wear, say, sing, whatever — somebody somewhere is probably not going to like it too well,” she said. “I just really try hard to do what I do and try to be nice to people and make great music and if people think they can look up to that, that’s wonderful. If not, that’s OK too.”