Regis Philbin stopped by the Today show where he reunited with former co-host Kathie Lee Gifford and held court over the program’s fourth and final hour. And do you know what? It was pretty magical. 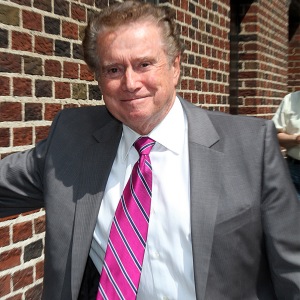 The fourth hour of Today belongs to Kathie Lee Gifford and Hoda Kotb. It’s casual. It’s loose. It usually involves alcohol. But Wednesday morning, Gifford was joined by a very familiar face, who no doubt transported audiences to the not-so-distant golden days of daytime talk.

That’s right: Regis Philbin was in the house.

Philbin and Gifford co-hosted their own hour-long talk show from 1988 to 2000, where they coasted on an unforced chemistry and endless, witty banter.

Their repartee was back in effect the minute Philbin emerged from a limo on the streets of New York City and began a scattershot interview with Gifford and Today host Matt Lauer.

“Regis is back!” the departed television personality told the gathered crowds, and for a while, we genuinely understood why and how much we missed him.

“I always thought if I could find someone who could ad-lib with me, that’s what I wanted to do,” Philbin said in the interview. And that’s exactly what he found in Gifford. Philbin would go on to host Live! daily with perky blonde Kelly Ripa, but his chemistry with Gifford — who stayed his friend even after they split on-air — was priceless.

Philbin was having such a good time on Wednesday that he decided to stick around and co-host the entire fourth hour with his former broadcast partner.

What do you think? Will this inspire some network executive to carve out time for Philbin and Gifford to share the airwaves once again? Or was this a one-time reunion that was fun while it lasted?