Keira Knightley’s back to doing what she does best — period dramas. The British actress plays the main character in Joe Wright’s big screen adaptation of Anna Karenina. She’s a character that encounters some serious highs and lows within her strained marriage. 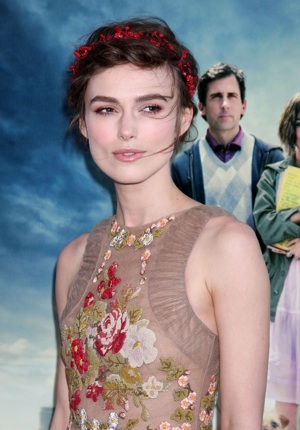 In real life, Keira Knightley is happily engaged to be married, but onscreen she’s miserable. The Oscar-nominated actress plays the title role in the upcoming adaptation Anna Karenina, where she endures her fair share of hardships.

Karenina marks Knightley’s third collaboration with Joe Wright, who previously directed her in Pride and Prejudice and Atonement.

UK movies and why we love them! >>

According to the film’s official synopsis:

The story unfolds in its original late-19th-century Russia high-society setting and powerfully explores the capacity for love that surges through the human heart, from the passion between adulterers to the bond between a mother and her children. As Anna (Knightley) questions her happiness, change comes to her family, friends, and community.

There have been several adaptations of Anna Karenina, so Knightley and Law have big shoes to fill. There was a 1935 version starring Greta Garbo and Fredric March, another in 1948 with Vivien Leigh and Ralph Richardson, as well as a 1987 made-for-TV movie with Jacqueline Bisset and Christopher Reeve.

Check out the first trailer below:

What do you think of Knightley as Karenina?