Whenever there is a Dannielynn sighting, it goes buzzy. This go-around, the girl we still think of as a baby appeared alongside her dad, Larry Birkhead, as he shared some heartbreaking moments about what life has been like without Anna Nicole Smith on Good Morning America earlier this week. 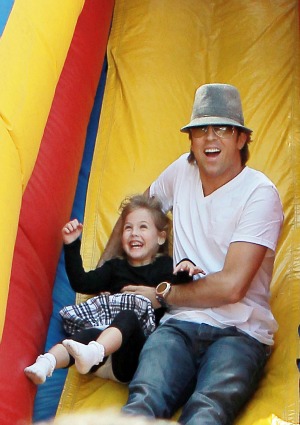 Dannielynn Birkhead’s been spotted a lot as of late. Most recently, the 5-year-old daughter of Anna Nicole Smith and Larry Birkhead generated a lot of interest for the (at times) heart-wrenching appearance with her dad on ABC’s Good Morning America.

And Birkhead addressed all the attention that’s been poured on his child — who looks the spitting-image of her former Playboy model mother.

“It’s weird when your child is 5 years old and trending,” Birkhead told anchor Robin Roberts. “There’s all these big stars… and the next thing you know Dannielynn’s picture is all over the place.”

In a recent outing at the Kentucky Derby, the 39-year-old Kentucky-born dad recalled that onlookers were “shocked” to see how much Dannielynn took after her famous mom in the looks department.

The television personality who first gained popularity as a Playboy playmate, became known later in life for her seeming off-the-rails, reality TV-documented antics.

Coroners ruled her death the result of an accidental overdose, caused by a lethal cocktail of prescription drugs.

Tragically, Anna Nicole’s son, Daniel Smith, 20, had died in much the same way — from an accidental overdose of a mix of painkillers — almost five months to the day before her.

The 20-year-old’s death also came days after Dannielynn was born.

“I also want to make things a cautionary tale… and give her the tools that she needs to where she has the opportunities that her mother and Anna’s son… won’t have,” Birkhead told GMA.

In a moment the single father was no doubt dreading, on a recent trip to the Bahamas where both Anna Nicole and Daniel are buried, Birkhead recalled how Dannielynn asked him: “Why did mommy die?”

Despite the somber moments, and perhaps taking a hint from little Dannielynn’s middle name, “Hope,” the father-daughter duo seem to have that positive outlook in spades.

Birkhead recalled how Dannielynn is already itching for her single dad to get hitched.

Dannielynn’s answer: Got to be Ga-Ga!