Ryan Seacrest is one man who can’t get down with Kourtney Kardashian’s birthing lady bits. The Keeping Up With the Kardashians executive producer recalls setting eyes upon the “raw footage” taken during Mason Disick’s delivery. 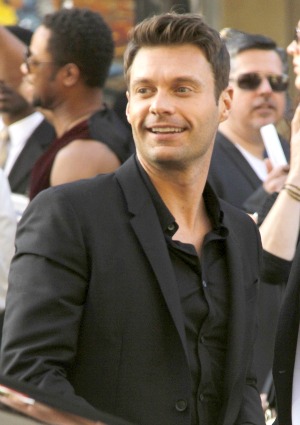 As Kourtney Kardashian’s 2012 pregnancy days draw to a close, it’s safe to say Ryan Seacrest isn’t chomping at the bit for a spot in the delivery room. The Keeping Up With the Kardashians executive producer has already been scarred for life by raw footage of the birth of her first child, Mason Disick.

“I remember looking at the raw footage of Kourtney having Mason, the baby,” Ryan Seacrest recently recalled to The Hollywood Reporter.

“I’d never seen a delivery in that much detail. Half of me was interested, but I was shocked that she essentially reached down and delivered her own baby.”

After taking in a serious eyeful of Kourtney Kardashian‘s nether regions, Ryan Seacrest was left to decide which bits should — and shouldn’t — air on television.

The Draw Something game show producer said, “And I was like, ‘How much are we going to show of this?’ And I realized that they were more qualified women to make this decision. She would have loved for us to air the entire thing. But I remember thinking, ‘How far do we go?'”

False alarm: No baby for Kourtney Kardashian yet >>

Ryan Seacrest went on to share one thing that has most pleased him through Keeping Up With the Kardashians‘ run is watching Scott Disick come around.

Speaking of the father, soon to welcome his second child with Kourtney Kardashian, Seacrest said, “He’s become a very popular character. He’s made a complete turn. I’ve seen him out, and people walk right past me and go take a picture with him. They are very excited to see him.”

Of the Kardashians as a whole he commented, “It’s a family with a lot of love, a lot of craziness, a lot of chaos. There are aspirational components, too, but at the core, it’s a group of sisters and a mom, and Bruce, who is just trying to figure out what’s happening around him with this storm of women. That struck a chord early on.”

No word yet on whether Ryan Seacrest will man up and watch footage of the 2012 delivery of Kourtney Kardashian’s baby, should cameras get up close and personal once again!