Fifty years have passed since The Rolling Stones formed a band in London! What will the veteran rockers do to celebrate such a milestone? Keith Richards shares his hopes for the “very hush-hush” affair. 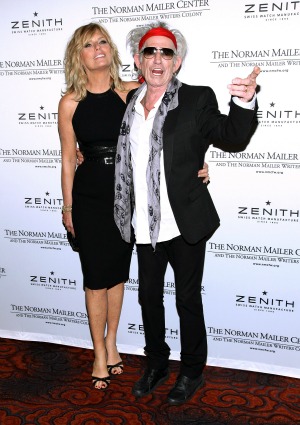 The Rolling Stones have much to celebrate as the 50th anniversary of the band’s formation draws near. It was 1962 in London when the rock ‘n’ roll magic began, and now Keith Richards is returning there once again to work on plans for an anniversary bash.

The band will gather in London this July to plot a celebration, with sources hinting The Rolling Stones will play at least one live concert before the year’s end — in addition to considering a tour in 2013!

“I’d like to get a couple of shows down and see how it goes,” Keith Richards told Rolling Stone magazine of the possibility. “But I’d love it.”

“It’s all very hush-hush,” the 68-year-old rocker, pictured here alongside Patti Hansen in 2011, went on to say. “I’m going over to London for a bit, so I’ll find out more then.”

Also on the table for discussion amongst The Rolling Stones bandmates is the recording of their first new LP since 2005. “We’re going to talk about that in July and see,” Richards confirmed. “I mean, I’d love to get some tracks down and see what songs we’ve got. And that goes along with part of getting the band back together and getting things moving. So I’d love to cut some tracks, yeah.”

The band was last together in April, when they were filmed by director Brett Morgen for a documentary celebrating their 50th anniversary, slated to be released this fall.

“Someone would mention a song, and within the second run they had nailed it,” Morgen shared of his time spent with The Rolling Stones. “Having screened through 50 years of material over the last six months, I would rank it up there with anything I’ve ever heard from them. They were extremely tight.”

Keith Richards added, “I thought I’d be quite rusty, after all we hadn’t done it for a while, five years or something. But it sounded as fresh as you could hope for. It was a great week.”

How much would you pay to see The Rolling Stones’ 50th anniversary concert?