Charlie Sheen opens up about his obvious mental breakdown and why he got fired from Two and a Half Men in the upcoming issue of Playboy. Read on to find out why he blames Dave Chappelle! 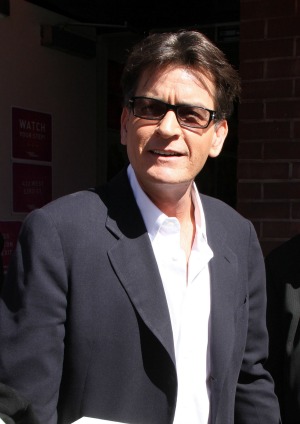 The Charlie Sheen of 2011 is a far cry from the Charlie Sheen of 2012. The wayward actor seems to be behaving himself for now — due in no small part to his new comedy Anger Management. The show, premiering June 28 on FX, gave him another chance at TV success. But what really happened to his amazingly lucrative gig on Two and a Half Men? The Warlock sat down with Playboy and explained.

“Everybody thought I had OD’d or whatever. No, I had a f****** hernia blow out of my stomach,” Sheen told the mag. “I called the paramedics, because that’s what you do, right? It was because of a Dave Chappelle sketch. Remember the scene where he’s a blind white supremacist who doesn’t know he’s black? It’s f****** hilarious. I’d never seen it, and I laughed myself into a hernia. That is 100 percent true. It’s his fault. There you go. Dave Chappelle cost me my job.”

That was simply the straw that broke the camel’s back, of course. Sheen had been on a downward spiral long before.

“I don’t think it was the show in particular. It was the buildup of all the time I’ve been in the business, the divorces and everything. I started to unravel,” he said. “I was mad about having to play the game — not that I was playing it well, but I’d been doing it for so long. I finally just said the things I had always been thinking. [laughs] But in the middle of a psychotic break.”

“I was in total denial. It wasn’t that bleak in my head. I felt I was winning by finally being able to speak my mind. I felt that was some sort of victory. And then it was fueled by the insane public outpouring of support.”

What about those amazing Sheenisms?

“Most of it came out of nowhere,” he said. “It wasn’t planned, it was just random. The tiger blood? I don’t know. It’s just a very dangerous animal. And there’s a tiger in Apocalypse Now, by the way, so maybe there’s a connection there. Adonis DNA? I don’t know what the f*** that was about. That was just stupid. That went a little far.”

Was all of 2011 just performance art, like Sean Penn said of Sheen’s breakdown? “That’s cool that he said that. It’s a compliment, but it’s not what was going on. I didn’t have a master plan. I didn’t realize it was going to create such a global firestorm. At the time, it felt like I was watching a lot of it from above. I was a little shocked by how huge the whole thing became.”

Him and us both.

Read the rest of the Playboy interview with Charlie Sheen online or in the July/August issue, on newsstands June 29.