Chris Colfer is spending his summer break from Glee wisely — he’s busy writing scripts! His first foray into screenwriting, Struck by Lightning, was just snapped up by Tribeca Film. 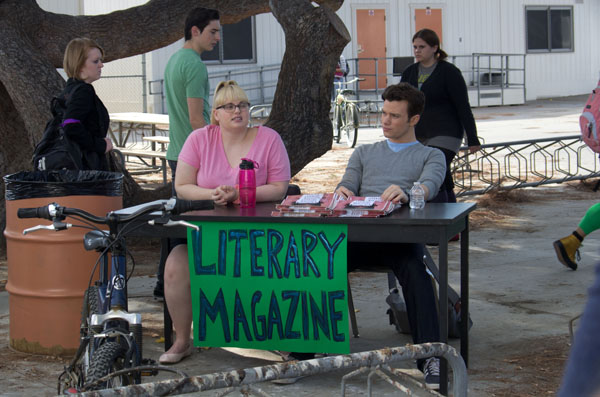 Chris Colfer is one of those rare quadruple threats in Hollywood: He can sing, dance, act — and write! The Glee cutie wrote the screenplay for Struck by Lightning — and Tribeca Film has just picked it up for distribution after it earned a standing ovation at the 2012 Tribeca Film Festival in April.

The film — directed by Brian Dannelly and co-starring Christina Hendricks, Sara Hyland and The Office’s Angela Kinsey — centers around the life of high school senior Carson Phillips (Colfer), a bright student who was on the path to greatness when he’s killed by a lightning bolt in the school parking lot.

“Demonstrating that life is what happens while you’re busy planning your future, Carson recounts the last few weeks of his life via witty, insightful flashbacks, including a blackmail scheme targeting the popular kids in school that he concocts with his best friend,” Tribeca writes of the plot. The film also co-stars Dermot Mulroney as his estranged father and Allison Janney as his mother.

Struck by Lightning will get a late 2012 theatrical release. It’ll also be available at the same time via on-demand platforms like iTunes, VUDU, Amazon, Xbox and Samsung Media Hub.

Does Colfer have what it takes to carry a full-length feature? Totally, judging by his likeability in the Fox musical sitcom. Plus, he shows a maturity way beyond his 22 years by penning this somewhat-autobiographical take on high school. Mostly, Colfer wanted to turn the tables on the way people grieve by making his character dead for most of the film.

Lea Michele tears up over season four return to Glee >>

“One of the biggest things I wanted to do is have a character call these people out on their fake grief and mourning,” he told NPR in April. “I mean, how many times are we at someone’s funeral and someone speaks at the podium, and we think, ‘Oh my God, they’re such a liar, they never knew them like I knew them, they weren’t as close as they’re saying they are.’ I think one of my character’s lines in the movie is, ‘It’s amazing how popular you become once you die.’ I just thought it’d be a great way to tell a story, from the perspective of being dead.”

See the Struck by Lightning trailer

Will you see Struck by Lightning?