Alec Baldwin allegedly punched a paparazzi in New York City as he and fiancee Hilaria Thomas were trying to get a marriage license. Now the photog’s in the hospital and Baldwin’s pleading his case… on Twitter. 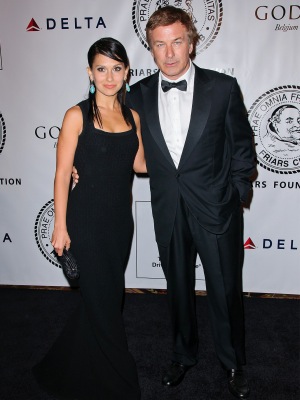 It should have been a happy day for Alec Baldwin. The 30 Rock and Rock of Ages star was in New York City, obtaining a marriage license with fiancée Hilaria Thomas, when the couple was confronted by swarming paparazzi eager for a lucrative shot.

What happened next depends on whom you ask.

The Daily News reported that Baldwin punched Marcus Santos, one of the paper’s photographers, on his way out of the Marriage Bureau. They even have a photo (which you can see if you click here).

Baldwin, meanwhile, did what he does best: Took to Twitter to plead his case.

“A ‘photographer’ almost hit me in the face with his camera this morning. ?#allpaparazzishouldbewaterboarded,” he Tweeted.

“The photographer who assaulted me has (belatedly) gone to a hospital claiming injuries. Colin Myler and his NOTW scams come to NY,” the actor shared.

But Baldwin might have stepped over the line when he related his photog slap fight with an actual crime, namely the Trayvon Martin case in Florida. Tweeted Baldwin, “I suppose if the offending paparazzi was wearing a hoodie and I shot him, it would all blow over…”

Celebs and Twitter often are a volatile combination. So Baldwin’s rep, Matthew Hiltzik, finally issued a statement claiming there were “no punches thrown” and that “any subsequent physical contact was simply Alec protecting himself.”

Self defense. Always a safe way out of a legal jam. So who do you think is at fault: Baldwin, or the newspaper photographer assigned to snap a picture of him on what was supposed to be a memorable day?