Dawn Tripp’s novel, now out in paperback, is a beautifully-written literary mystery that focuses on a half a century of two interlinked New England families. 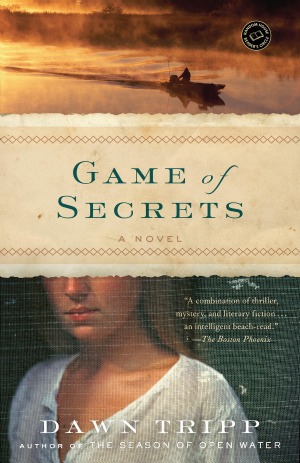 Jane Weld was just 11 years old when her father went missing. A few years later, in the early 1960s, when a skull with a bullet hole in it was found near the local creek, everyone agreed it had to be Luce. After all, the man was known to have been a thief and an ex-rum runner, not to mention that affair he was having with pretty, but married, Ada Varick.

Fifty years later, Ada is in assisted living and Jane is showing her age. The two families have remained linked in complicated ways, and one of the constants is Jane and Ada’s weekly Scrabble game. Although the women generally talk about their grown children or tell stories about the past, Jane is sure Ada knows the truth of her father’s death, and she looks for clues in the words the older woman uses on the game board.

In Game of Secrets, Dawn Tripp uses multiple viewpoints, different generations and several points in time to tell the complex story of two families tied together by secrets, love and distrust. Although the mystery of Luce’s death is the thread that runs through the core of the novel, Game of Secrets is more than a murder mystery. It’s a beautifully written character study of flawed individuals who are looking for the truth of who they are and the strength to trust both love and friendship.

Of the three principal women, it’s Jane’s daughter, Marne, who seems to grab center stage. She starts off full of reluctance — reluctance to come home to help out, reluctance to date Ada’s son Ray, reluctance to be connected. But as she discovers her parents’ secrets and starts to see events from new perspectives, she takes her first tentative steps toward forgiveness and understanding.

Tripp has a special ability to create an atmosphere, making the New England environment as much a character as any of the people. Her prose often reads as poetry, evocative and dreamy:

The woods now, blue. This side of evening. The lengthened shadows of the trees wrung through the yard. In the kitchen, the timer rings. I hear her opening the oven door, the baking dish slid from the rack, a muted thud as she places it onto the counter to cool. Through the window, the world steep in sapphire—stones, tree, grass—drunken over in that blue, soaked down. (p. 199)

Game of Secrets, now available in paperback, is a balanced mix of literary fiction, mystery and family saga. Slip a copy into your beach bag this summer.