Bobby Brown was surrounded by all of his children during his wedding Monday to longtime girlfriend and manager Alicia Etheredge… with one notable exception. His daughter with the late, great Whitney Houston was nowhere to be seen. 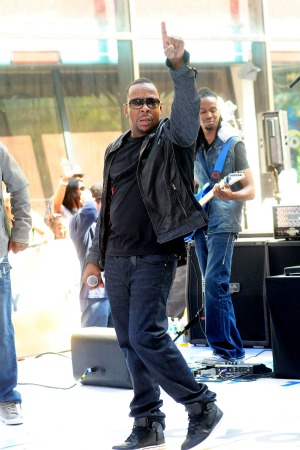 Pics posted on Instagram show Bobby Brown flanked by family and friends during his wedding to Alicia Etheredge — including four of his five children.

People reports his children from prior relationships, 20-somethings Landon and La’Princia, were at the nuptials in Hawaii Monday. Bobby Jr., 19, and Brown’s only child with his new wife, 3-year-old Cassius, were also at the ceremony.

But there was a noticeable void during what otherwise appeared to be a happy ceremony: Brown’s daughter with Whitney Houston, Bobbi Kristina Brown, was nowhere to be found.

It’s no secret that the relationship between the 43-year-old R&B star and his only child with Whitney is rocky at best.

The 19-year-old reportedly wants to legally change her name, and prefers to go by the name “Krissy.”

If that’s the case, it appears Bobbi Kristina is choosing “Team Whitney,” as sides were clearly marked during the televised funeral for the late super-singer back in February.

During that funeral, it appeared that Brown was a no-show. He later claimed that the Houston family kicked him and the rest of Team Bobby (which included three of the aforementioned kids) out of the church.

The Houston family has reported that Bobby wasn’t following the rules. They claim the star tried to bring his kids up to the front of the church during the funeral, when they were supposed to sit in the back with their uncle.

It’s been speculated that a lot of hard feelings remain for the Houston family over Bobby’s alleged involvement with getting Whitney hooked on the bad s**t in the first place.

Contrary to her wholesome image, Whitney herself has famously said she was using before she met Bobby.

Brown had been engaged to his current wife, manager Alicia Etheredge, since 2010.

The marriage came during a break in Brown’s busy touring schedule with New Edition, and less than 24 hours after the group’s concert in Honolulu.

Here’s to hoping any new Brown family reality TV shows don’t turn out like this.