A photo featuring new mommy Hilary Duff holding a cigarette while standing outside an L.A. bar this weekend is causing a Twitter pile-up of sorts, and a PR train wreck that the ex-Disney star is trying to clean up. And we haven’t even got to the actual car wreck that Duff is being sued over. 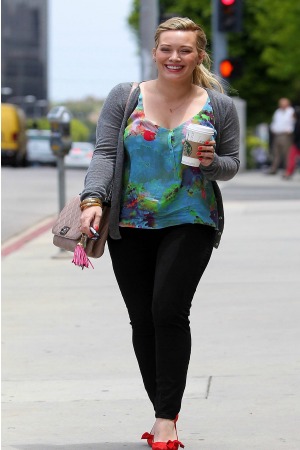 Of course, HIlary Duff insists she doesn’t puff, as the photo making its rounds worldwide suggests.

The photo features the 24-year-old holding a cigarette outside Rock & Reilly’s Irish Pub in L.A.

She says the cig’s not hers.

“Yikes me holding a cigarette for my friend might have been a bad idea! pretty bummed about the photo,” the Disney graduate said. “Sorry guys, looks worse than it is!”

Duff gave birth to son Luca in May, and the dangers of smoking to the little one were what really had bloggers and tweeters up in arms — leading the actress to finally snuff out the rumors that she was a puffing mother.

Smoking is never a good idea, especially with a new baby in tow.

But there is at least one big reason “why” the actress might be taking to the smokes to help her problems go up in smoke.

E! News reports Duff is being sued by a woman who says the actress slammed her Range Rover into the woman’s car, causing serious injuries.

The injuries to Rachel Owens were so severe, according to court documents, that Owens was unable to work.

Not a good week for Lizzie McGuire.