Earlier this year, hip-hop-utante Nicki Minaj’s rider — celeb-speak for “tour demands” — came to the surface. But Nicki may want to take her diva training wheels off, because Madge has been at this game since before Harajuku Barbie was a twinkle in her mom’s eye, and the mother of all diva’s latest rider reveal doesn’t disappoint. 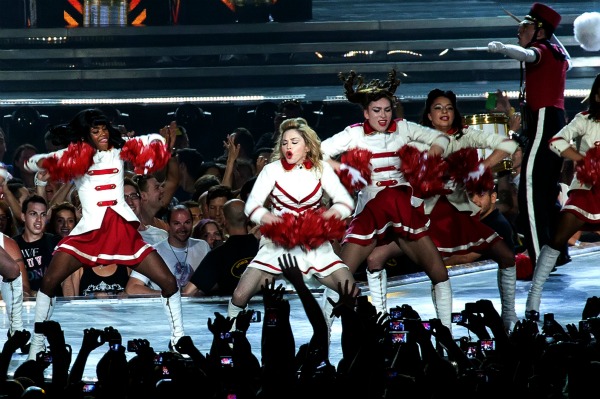 It’s hard out here for anyone associated with Madge’s MDNA tour.

In a crazy, mixed-up world of celebrity riders where Iggy Pop demands brown M&M’s® be removed and Nicki Minaj must have 12 room temp and 12 iced water bottles within arm’s length, Madonna’s 200-person crew takes the cake.

“Madonna has probably the longest list of requirements of any of the world’s music stars,” a source told the U.K’s The Daily Star. “She expects things to be just right or it puts her off her stage show.”

First, we’ll start with the “longest list of requirements” part.

The Material Girl’s circle of associates is the size of 10 — count ’em 10 — Duggar families.

In Touch reports this mega-crew of attendants includes 30 bodyguards, chefs to be at Madge’s every beck and call food-wise, a yoga instructor (whose going to keep those muscles extra-sinewy, after all?),  and an on-site dry cleaner.

To the part about the 53-year-old pop queen demanding everything be “just right,” not only does she expect that her dressing room swathed in a “special fabric” be equipped with 20 international phone lines, but the flowers adorning the room must be trimmed to “precisely 6 inches.”

No hydrangeas! We all know that the beautiful flower that is Madonna wilts when exposed to hydrangeas. Or, at the very least, openly displays her distaste for them after a well-meaning fan offers the plant as a gift.

Madonna must have light-pink roses and lilies.

The super-demands transcend the dressing room.

The insider who probably doesn’t want to be a Madge insider, also went on to say that all furniture is removed from her hotel digs so she can be surrounded by cherished pieces brought in from her actual home. That way, the hotel really is a home away from home.

So how does Lady Gaga, the pop-star Madge keeps accusing of plagiarizing her great works, compare?

Well, Gaga says “no” to sweaty or smelly cheese, insisting that it be served on ice and not be of the stanky variety, and the meat-dress-wearing star demands a “whole roasted chicken” be at her disposal in the dressing room — along with a wide array of sodas to quench her thirst.