For months, Giuliana and Bill Rancic kept the sex of their unborn child a secret. But before a baby shower on Sunday, the couple revealed that they’re expecting a baby boy. Find out what the Rancics had to say about their new son. 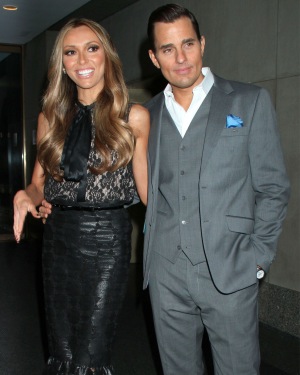 After attempting to keep the sex of their upcoming baby a secret, celebrity parents Giuliana and Bill Rancic confirmed via Twitter that they will be welcoming a baby boy into the world.

“Beyond excited to announce @BillRancic and I are having a……….BOY!!!!!” Giuliana posted on her feed.

The couple is expecting their first child through a gestational carrier. Prior to revealing the sex of their child, Giuliana confided that protecting that one last shred of information was important to them as a media-savvy couple.

“It’s like the only thing in our lives right now that’s a secret,” she said to E! News. “Everything else is out there for the world to see, so we’re just seeing how long we can keep it a secret. It’s fun having something between the two of us.”

But Sunday marked a baby shower thrown by family and friends, prompting Giuliana and Bill to reveal that they’re going to have a lot of blue in their lives.

Opening up to CBS News shortly after the announcement, Giuliana said, “We are so ready for everything that comes with being a new mom and dad!”

The couple first confirmed the pregnancy back in April. Their struggles to conceive were documented in the reality TV series Giuliana & Bill, which captured the couple’s trials with IVF treatments and a sad miscarriage. Giuliana also was diagnosed with breast cancer and underwent a double mastectomy, which added to their pregnancy complications. But this recent news is overwhelmingly positive, and the couple appears ready to become parents to a bouncing baby boy in the near future.