Justin Bieber made his teen fans swoon when he said he’d collaborate with One Direction. Would teen girls explode if this happened? We say yes. 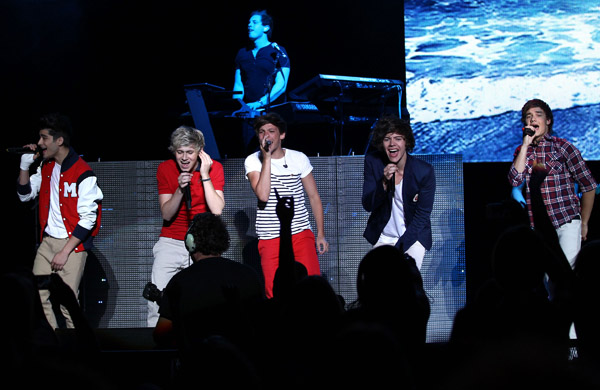 “They’re my boys. They came to my house, we hung out. I have a pool so we all went in and chilled out,” Bieber told Britain’s Radio 2 during an interview last week.

The “What Makes You Beautiful” singers might even have a collaboration with the Bieber in the future — all they have to do is make the call.

Justin Bieber’s manhood takes a hard hit from his manager >>

“If they want me on their album, they just have to ask,” Bieber added. “They’re talented.”

This is an about-face for the Canadian pop singer — he dismissed rumors of a duet back in April after Niall Horan tweeted about being in the studio with him.

“They just came by the studio and heard some of the album Believe.”

It’s obvious the boy band looks up to their pop star brethren, including Bieber. “It would be cool to work with Justin Bieber. But who knows?” Liam Payne told CBS Local in April.

But they also love female artists like Kelly Clarkson.

“We were in L.A. and we went in to record the song (the Clarkson-penned “Tell Me a Lie”) we got the demo and it was her singing it,” Harry Styles said. “Obviously, she had written it. We went in and recorded it in L.A.”

“For us it was just weird thinking that on X Factor when we started out we performed a Kelly Clarkson and now she wrote a song for our album. Pretty crazy.”