Ever the gentleman, Sir Paul is using his 70th birthday as an opportunity to pimp out singer-songwriter Paul Weller’s version of The Beatles’ song, “Birthday” — with proceeds going to a charity to help children in war-torn countries. 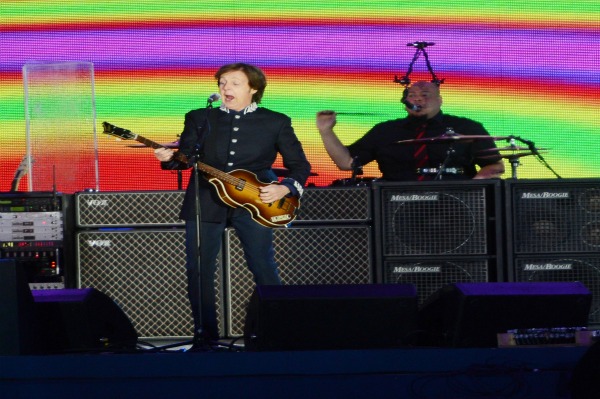 It’s hard to believe that Paul McCartney turned 70 on Monday. But what’s not hard to believe is that the consummate English gentleman is using the big 7-0 to promote War Child, a London-based charity that helps kids whose lives have been torn apart by armed conflict.

As millions gasp at both the age (“I can’t believe Sir Paul’s 70!”) as well as the stamina of the always-touring and recording music legend, the former Beatle took to Twitter to direct U.K. and Irish fans to “Birthday.”

“Get your copy of ‘Birthday’ by @paulwellerHQ now,” the post read Monday morning. “It’s only available today & proceeds go to @WarChildUK.”

The song originally appeared in The Beatles’ 1968 album, The White Album. This go around it was performed by another Brit singer-songwriter, Paul Weller, better known as “The Modfather” for his part in the mod revival of the ’70s and ’80s. Weller is also credited with inspiring bands such as Oasis, Blur and Pulp.

On the legendary Beatles’ official website, it was noted that the “two Pauls” paired up in 1995 to record a cover of “Come Together” under the name “Smokin Mojo Filters” and with other Brit artists, like Noel Gallagher.

As Sir Paul uses his birthday as a vehicle to promote War Child, fans from around the globe sent their xoxoxo’s to the beloved artist.

According to ABC News, a string of notable artists worldwide gushed about McCartney, with Aerosmith’s Steven Tyler proclaiming: “He’s a whole second wind and a new childhood and a new marriage” and Bonnie Raitt declaring: “He is just un-stoppable.”

“He is really shown’ us how to do it … He’s just one of our greatest songwriters ever and such a great singer and a great person,” she added. “He’s just … not a jerk!”

Would a jerk have such a following that a Facebook group is campaigning for the Empire State Building to be lit up to mark the 7-0? Methinks no.

Not surprisingly, McCartney is seeking out a less flashy gathering with family, close friends, and wife Nancy Shevell.