Say it ain’t so! Is Charlie Sheen done with Hollywood? The actor recently described his upcoming FX show, Anger Management, as his “swan song.” After three decades in the business, it sounds like Sheen’s ready to throw in the towel. 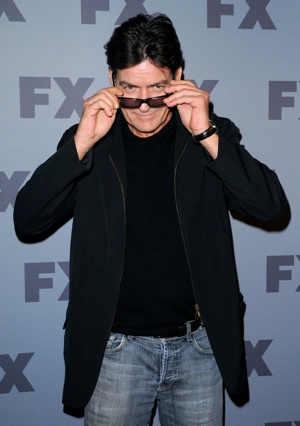 Charlie Sheen is letting it all go. After a tumultuous year of TV wars and goddesses, he’s turned over a new leaf. The actor has a new show, on a new network, and a new outlook on his career.

Later this month, Sheen will star in the FX comedy Anger Management. The series is loosely based on the 2003 film of the same name starring Jack Nicholson and Adam Sandler.

It follows a former minor league baseball player who attempts to resolve his anger issues to become a “non-traditional” therapist.

Sheen himself is no stranger to therapy, anger or baseball, so the show is a perfect fit. He’s also a veteran of TV comedy. Aside from Two and a Half Men, his résumé includes a Golden Globe-winning stint on ABC’s Spin City (2000-2002).

Whether Anger Management sinks or swims isn’t important to Sheen. He told The New York Times that after the show wraps, he’s heading to early retirement.

“When I’m done with this business it’s just going to be about soccer games and amusement parks. And when this ends, I’m done. This is my swan song,” Sheen said.

“Yeah, man, I’ve been doing this 30 years. And there’s a lot more out there to do than make-believe, you know? I mean, I’m grateful. I’ve got a dream life as a direct result of television, you know? But at some point you just get tired of wearing somebody else’s clothes, saying somebody else’s words, and working in somebody else’s space. I’m also aware of the fact that you don’t get these kinds of shots in the same lifetime. You’re only supposed to have one hit show, unless you’re Kelsey Grammer.”

It will be interesting to see if Sheen sticks to his word.