Ice cream may not be up for any Academy awards, but it’s made plenty of appearances on the big screen. Let’s take a look at some of ice cream’s best cameo appearances. And… roll ’em! 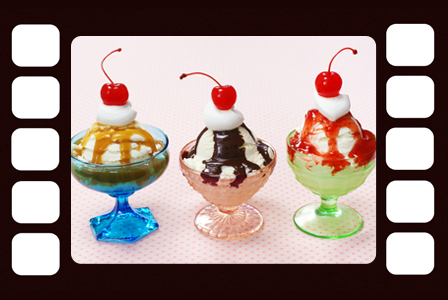 Here, the likeable princess, played by Ann Hathaway, experiences a bit of a party foul when she scoops up a heaping spoonful of her “palate-cleansing” sorbet at a large formal dinner party. The cold mouthful turns into an embarrassing situation when she can’t quite swallow the ice cream and can only get garbled words out of her frozen mouth.

In this Jackie Chan flick, the martial artist escapes a near abduction from a Turkish bath, only to find himself being chased through the market nearly naked. While fighting off his would-be captors, he uses anything he can find in the market stalls to cover his manhood. At one point, with only a newspaper to cover himself, he runs into a young boy’s strawberry ice cream cone, which sticks to his paper and leaves him exposed yet again.

In this hilarious and highly inappropriate comedy starring Sacha Baron Cohen, the main character Borat buys an ancient ice cream truck for his cross-country trip when he can’t afford a Hummer. In one scene, Borat pulls up his ice cream truck to a gaggle of excited kids whose joy turns to fear when a wild bear thrusts its head out the truck window and lets out a huge roar.

This holiday classic features a memorable scene when a young George Bailey serves Mary a scoop of chocolate ice cream at the soda fountain counter and she leans over and whispers into his deaf ear, “Is this the ear you can’t hear on? George Bailey, I’ll love you till the day I die.”

For Your Eyes Only

When young ice skater Bibi Dahl, played by Lynn-Holly Johnson, jumps into James Bond’s bed and tries to seduce him, he says he doesn’t think her uncle would like it. In one of the more memorable quotes from the film, he then tells her “Now put your clothes back on, and I’ll buy you an ice cream.”

After an experience like this one (in a scene from the film Evolution), wouldn’t you want an ice cream too?